Treasure Island is a great show for the holidays as it is suitable for audience members from 12 and up (according to Book-It’s alert on its promotional materials). Bryan Burch adapted Stevenson’s classic story set some time between 1757 to 1762. I managed to re-read about half the book before the opening, and Burch used a light hand bringing the novel to the stage. It’s all here:

Nearly 13 year old Jim Hawkins (Alex Silva) lives and helps out at the Admiral Benbow Inn with his father (unseen) and mother (Gin Hammond). A mysterious stranger, “Captain” Billy Bones (Jim Gall), arrives and asks Hawkins to keep a look out for a man with a wooden leg. But Bones is found, and he gets first one and then a second unwelcomed visit by pirates looking for him and the map he holds of buried treasure.

After Billy Bones’s death from overdrinking and the stress of defending his secret map, Jim finds the map and shares it with the Doctor (Arjun Pande) and Squire (Eric Ray Anderson) of his town. The Doctor and Squire undertake to hire a captain and ship and go find the treasure. The man with the wooden leg is Long John Silver (Geoffery Simmons) who signs on as the ship’s cook. Silver plans to organize a mutiny after the boy (Jim) and the adventurers lead him to the treasure. Jim overhears these plans and helps thwart the mutiny.

The show is made or fails according to how well Alex Silva can carry off the role of Jim. He carries it off quite well. From the opening when he introduces himself and says he has the burden of telling the bulk of this tale, to the close of Act 2, young Silva is quite at home on the stage. It was especially interesting to see how he handled the mishap of a coin he was given by Billy Bones falling out of his pocket as he was hurriedly exiting one scene. He picked it up on his next entrance and put it back in his pocket without missing a step or a line. No surprise here, as Silva has quite a long resume already with appearances in productions at the Seattle Children’s Theatre, the Seattle Rep, Strawberry Theatre Workshop, among others. 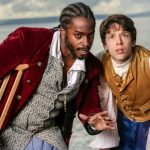 Geoffrey Simmons did a terrific job with Long John Silver. As fit his purpose, Silver was friendly, conniving, or threatening. Young Jim is both drawn to Silver and repelled by Silver’s fluid moral compass. Maybe he experiences Silver as a surrogate father figure after his own father dies of illness early in Act 1? Simmons has been a professional performer for 30 years and also served 11 years in the Navy. He radiates “command” and “authority” in the continual jockeying for dominance among his fellow mutineers. He silently established himself as the alpha male every time with a look or a gesture. Simmons embodied Stevenson’s view of Silver as a “smooth and formidable adventurer.”

The action and choreography is riveting, especially one scene of an attack on the stockade enacted in slow motion. The general acting is first rate by the leads and the ensemble. Look carefully at the list of the cast and you may spot a name or two of your favorite actors. Director Corey McDaniels made sure this production never lagged and the time whizzed by fast like an errant musket bullet.

In a rarely reprinted preface, Stevenson admitted that he drew upon the pirate lore he knew from reading literature. Treasure Island has pirates elements that have evolved into cliches, including: the talking parrot, the sea shanty: “fifteen men on a dead man’s chest, yo-ho-ho and a bottle of rum,” the wearing of an earring once you’ve sailed south of the equator.

Director Corey McDaniels and his production team pulled off all the locales and scene changes in the novel with the use of sound, lighting, and the inventive uses of tables and benches. A door opening, for example, would be represented by a burst of light from a spotlight. The center raised platform represented the interior of the inn where young Jim Hawkins, the main narrator, grew up, and also the room of their mysterious guest, then the deck of the ship sailing to Treasure Island, then a stockade, and again the deck of the ship under sail. It was also the island itself, the nook where the treasure was presumed to be buried, and the beach where a party sent ashore landed.

Colorful and elaborate costumes by Jocelyne Fowler really helped to establish the period and each character.

Theater enthusiasts new to Seattle or recently taking up live theater may not appreciate Book-It’s special charms. To wit: Book-It starts with novels, then adapts the novel to a full stage production with stage furniture, props, lights, sound, and actors knowing their lines. This is not reader theater where actors read their lines from the script. Instead, the descriptive or narrative part of the novel are parceled out to the actors in a scene, and the dramatic parts and dialogue are performed like a regular play. Nothing else is quite like Book-It’s hybrid shows that has elements of recitation interwoven within a fully staged production.