Oliver Girouard as Tobias, with Ensemble

A sooty, brick set opens and closes like a set of razors, transforming spaces; a scaffold serves as love-nest, confessional, and gallows; a puffing smoke-stack signals bakery goodies before morphing into a hideous crematorium. Seattle Musical Theatre explores ghastly themes of corruption, retribution, and disaster in Sondheim’s most operatic of musicals, satisfyingly perfect for Halloween — or the November election.

With words and music by Stephen Sondheim, the grimly funny, ultimately tragic story’s roots go back to a British serialized novelette of the mid-1800’s that gained popularity in England and then the United States. Playwright Christopher Bond created of this a stage melodrama in the 1970’s, adding elements that Sondheim retained in his 1979 Broadway musical. A convict on a transport ship to Australia, the “barber of Fleet Street,” saved from drowning, returns to London under the new name Sweeney Todd. Determined to wreak vengeance on the judge who raped and murdered his love Lucy, Todd sets out on a murderous rampage with the assistance of the love-besotted Mrs. Lovett, proud baker of the “worst pies in London.” Using a secret ingredient that also helps them dispose of a rising mountain of corpses, the pie business takes on new life. Ultimately, however, as these things must, the scheme is exposed, innocent blood is shed, madness ensues, and the curtain drops on a scene of woe. 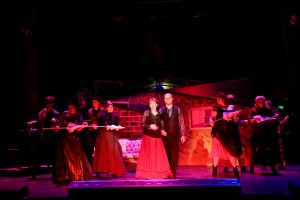 Under SMT’s Artistic Director Chris Mayse’ seasoned guidance, the production rises above its rough edges. A gifted six-member orchestra under the baton of conductor Nick Durand pumps out a kaleidoscopic range of tones and emotions. And this musical has it all: from the most macabre evil to Tom Lehrer-funny (The Priest Song!) and sweetly poignant love songs, all of it undergirded by the unfolding horrors of abuse, exploitation, greed, and revenge.

Music Director Elizabeth Rainey deserves credit for providing the solid musical foundation needed to pull off, in four short rehearsal weeks, a project of this scope and complexity. Mayse has assembled a mostly strong cast of principal singers and actors, and an ensemble that moves with slightly uneven but enjoyable determination through a challenging array of crowd scenes, characters, set-pieces, dance numbers, and choruses. Also to Mayse’ credit is his dedication as Artistic Director of SMT to provide opportunities to many young interns in all phases and capacities. The sense of ensemble, teamwork, and determination to accomplish a challenging task permeates the production. 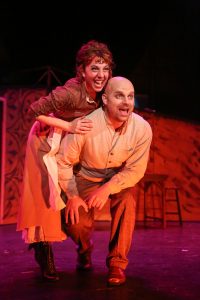 The strong voice and accomplished technique of singer Oren Mauldin in the role of Sweeney Todd nearly make up for his stiff, somewhat studied physical presence. Thankfully, his partner in crime, Mrs. Lovett, is played by Rachel White with all the energy, spirit, and physical inventiveness one could hope for, bouncing off Mauldin’s blank slate like a manic chihuahua off a screen door.

The opening scene of the play belongs to the vagabond waif, Tobias, played on opening night by Oliver Girouard (the role is shared by another young actor, Caden Tate). In the “prologue” (“Attend the tale of Sweeney Todd…”) Tobias introduces each member of the ensemble cast, and establishes his presence as a central element in the production: innocence corrupted in the “black pit” of a world like London. Girouard’s mic didn’t always do full service to his clear, well-enunciated singing, but his stage presence and emotional range make him a pillar of the cast. 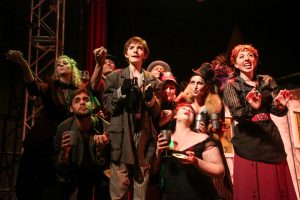 Oliver Girouard as Tobias, with Ensemble 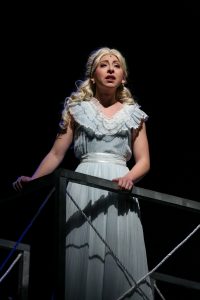 Shining in the roles of the young lovers Johanna and Anthony, Daina Goldenberg and Matt Lang provide a bright foil to the dark world their naiveté temporarily conceals from them. Lang’s sweet tenor voice and British-Navy-boy good looks are perfectly suited to the young idealist who rescued Todd from a watery grave. Goldenberg’s feather-light but powerful voice and passionate physicality carry some exceedingly tricky duet and solo passages soaring with grace. 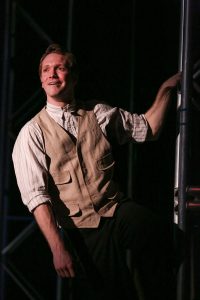 Other memorable moments of song and action came with Beadle Bamford’s hilarious “Ladies in their Sensitivities” number with Judge Turpin. Jared Baron Spears as the Beadle gives a performance that starts out as Gilbert and Sullivan stock character but soon descends into a more hellish — and topical — portrayal of police brutality. 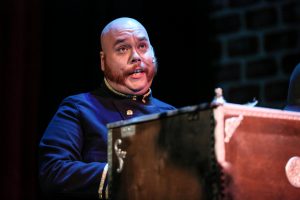 In Judge Turpin, Eric Hartley finds depth and layers of self-interest, ruthlessness, self-hatred, and despair. The judge’s solo mea culpa, “Johanna,” offers a portrait of a soul overwhelmingly torn between remorse and lust. Hartley’s rendition is devastatingly authentic and wrenching — the most truthful emotional moment of the show. Fittingly, in the same space at the top of the set and yet at the very nadir of human nature, Lovett, Todd, and Tobias appear in a tableau, uplifted and destroyed in the final moment of the play. 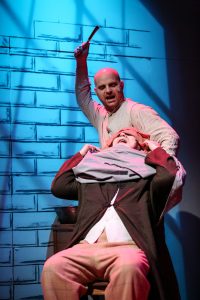 In this and other respects the set serves the story. Ingeniously designed by Brandon Scharf and realized by jack-of-all-trades Jordan Gerow (Sound Director/Technical Director/Master Carpenter), it holds in its hinged-blade backdrops the barber’s bare-bones salon/execution chamber; Mrs. Lovett’s “worst pies in London” pie shop; a lunatic asylum; various London streets and alleys; a courtroom; the basement slaughterhouse and crematorium – all this while crafting a coherent space in which pairings of high and low, funny and tragic, beautiful and macabre, are contrasted and illustrated. Costumes (by Audrey Herow) are rich in color and texture, illuminating the story along with the set, lights and sound. 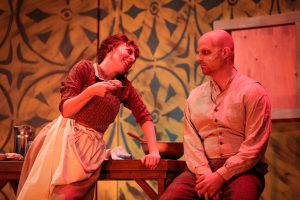 Rachel Wilkie and Oren Mauldin in a tender moment

Engineering a full body mic system for 18 actor-singer-dancers, and coordinating this with a multi-piece orchestra playing some of Sondheim’s most advanced and complex scoring, is a daunting task; the over-all sound integration is not uniformly successful. Sound levels diverged at times, with many passages of rich language difficult to decipher. Still, the show’s many elements of teamwork carry the story forward on a rich, never dull journey of sound, sight, word, and music.

The sum of this production is more than its parts: musically engaging and skilled, visually and viscerally entertaining, surprising and inventive, well-paced and well-acted by an essential core group of professionals, this is a creditable presentation of a 150-year-old story. At the darkest and most macabre holiday of the year, at the height of an almost cannibalistic display of political and personal ruthlessness weeks before an historic election, people keep asking: “Oh my god! Where is the bottom?” You’ll find it here. It might make you feel better.

But don’t take the kids.

Music and Lyrics by Stephen Sondheim; Book by Hugh Wheeler