It tells the story of Ray Leon, the father of two hemophiliac boys, and Dr. Roz Kagan from the late 1970s through the early 1990s. They cross doctor-patient boundaries as they struggle to deal with caring for people with hemophilia and the effects of the AIDS epidemic. Overall, Roz and Ray shows us a powerful bond between two individuals, while confronting the audience with a difficult piece of American history. 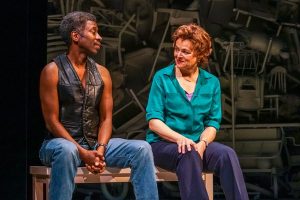 Partly inspired by her father’s experience treating children with hemophilia from the ‘70s to ‘90s, prolific playwright Karen Hartman’s new script is well-crafted. The complex characters feel human. The use of flashbacks is effective, and there are many deeply moving dramatic moments, especially when the personal stories connect with the larger, chilling reality of the AIDS epidemic. However, the play’s impact is softened by the ending, which feels indulgent and fifteen minutes too long.

Chay Yew directs a strong, no-frills production. Nuanced and powerful performances from Broadway veterans Ellen McLaughlin (Angels in America) and Teagle F. Bougere bring the script to life. Tim Mackabee’s set design is simple and effective. Lighting designer Geoff Korf and sound designer/composer Christopher Kriz use their talents to ensure certain moments have maximum impact. The high production value lives up to the reputation of the Seattle Rep. Overall, it is clear everyone involved in Roz and Ray applied considerable talent, skill, and dedication to the show.

Roz and Ray is one of the plays to see this fall. An excellent production with powerful personal and political moments, it is sure to challenge, entertain, and move every audience member.