SPT Goes to “The Other Place” 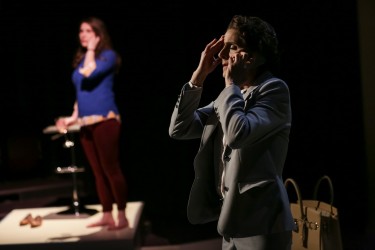 Very little is what it seems to be when we first meet the fascinating Juliana Smithton, the protagonist in Sharr White’s “The Other Place”. She appears to be a successful, fifty-two year old scientist, pitching a new drug that may successfully halt dementia. Juliana opens the play presenting a crisply moving Power Point at a pharmaceutical convention in Saint Thomas. The narrative line quickly pulls the rug out from underneath the audience as we begin to shift to multiple times and places all involving the woman’s increasingly fragmented life. Mysteries pop up with frequency, providing an intriguing maze of a plot line, but the real focus of the evening is the powerhouse performance by Amy Thone, assuming the scientist’s role for the Seattle Public Theatre.

Seattle is in the midst of a mini Sharr White festival. Earlier this season Theatre22 put up his two person one-act Annapurna. At first glance this play and “The Other Place” written only a few years apart, seem to have little in common. Yet a particular quote in the program’s Notes from the Director has White observing, “his plays are largely about lost people getting found.” Indeed both the long estranged husband in Annapurna and Juliana are two characters slipping further and further away from the day-to-day world that largely consumes most of our lives.

“The Other Place”, a title that echoes throughout the script, shaping and reshaping its definition, will twist and turn in its plot line like a mobius strip. After Juliana has begun her lecture, we soon cut into other moments in her life where we meet her husband (Ray Gonzalez) and a variety of other men and woman who people her world. Jocelyn Maher and John Bianchi, both of whom skillfully slip into these different characters, handle the multiple roles. Who these people really are and what they are doing in Juliana’s life makes up a good deal of the mystery needed to be answered as the plot develops.

The role of Juliana is remarkably demanding, for she will go through head spinning personality changes as the one-act moves on. Amy Thone is more than up to the challenge. Up until this play, I had only seen Thone in Shakespearian roles where she excelled. Here, she is flat out mesmerizing, a rock star of the stage. The moments of joy, confusion and finally overwhelming pain that Juliana experiences are all brought to life in a startling affective performance.

The latter stages of the play abandon the staccato rhythms of the earlier scenes, and matters slow up just a bit in an extended scene between Juliana and a woman now seeming to be living in Juliana’s old house. Yet in these quieter moments, White has a solid ear for dialogue that can both establish and deepen characters and successfully move the plot along. Director Kelly Kitchens keeps the play focused right through its haunting final scene.

“The Other Place” runs through April 17, presented by Seattle Public Theater at the Bathhouse on Green Lake. For more ticket information call 206-524-1300 or go to www.seattlepublictheater.org.