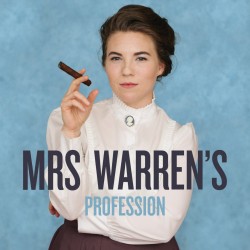 When the Victorian version of “Don’t ask, Don’t tell” is ignored between a mother and daughter, and the wealth, which paid for the daughter’s expensive education, comes from prostitution and pimping, all hell break’s loose in George Bernard Shaw’s play Mrs. Warren’s Profession.  Directed by Victor Pappas, Seattle Shakespeare Company opened this delightful play at Center House in Seattle Center last weekend

In Shaw’s own words the play was written “to draw attention to the truth that prostitution is caused, not by female depravity and male licentiousness, but simply by underpaying, undervaluing and overworking women so shamefully that the poorest of them are forced to resort to prostitution to keep body and soul together.”

Needless to say, he had major problems getting it past the censors. Written in 1893, it was published in 1898, but censored by the Lord Chamberlain’s office.   Its first performance was not until 1902, significantly right after Queen Victoria had died, but in a private club, where the censorship rules did not apply.  In the U.K, the first public performance was in 1925, after the great cataclysmic social, political and cultural changes wrought by the First World War.  (N.B. after a limited suffrage for woman had been passed -1918,but before universal suffrage for women-1928)

Although the motivation to write this play may have been to discuss the economic reasons for women, trapped by circumstances, to choose prostitution over other forms of keeping a roof over their heads, the play has layers of conflicts. First of all, there is the age old generational conflict of parent vs. child.  A parent makes sacrifices in order to give their child the parent’s version of what the child needs.  The child has their own version, which makes the parent question whether any of their sacrifices were worth it.

Then, of course, there is a discussion of free-will as well as a discussion of whether profiting from prostitution is less respectable than investing in businesses which exploit workers more mercilessly than pimps and brothel owners exploit women.  Predictably but not trivially, there is the discussion as to whether most “respectable” marriages are not just another form of prostitution, at a time when living wage jobs for woman were virtually non-existent and women were legally barred from most professions.

Set in the 1890’s, Vivie Warren, the daughter of Mrs. Kitty Warren, is the epitome of the “new woman” or what they called a “Blue-stocking”.  As the play opens, she has just finished her final comprehensive exams in Mathematics at Cambridge University with the third best results in her year.  (which is an EXTREMELY big deal) As a new woman she has no romantic tendencies, prefers detective stories to poetry, hard-work to holidays and has no interest in conspicuous consumption of culture, such as the opera, fine art, architect or literature.  For a career, she is considering law or actuarial science.

Secretly, her mother is a former high-end prostitute, who still owns a chain of successful brothels on the continent, where she spends most of her time. Mrs. Warren has not raised her daughter herself, but farmed her out to various caretakers and schools, and now hopes to get to know Vivie.  She has arranged a few suitors, as any dutiful mama would in those days, as the next step in Vivie’s life.

What ensues is a tragic comedy as Vivie receives her suitors with disdain, demands to know the nature of her mother’s “profession”, forgives her, re-evaluates her forgiveness and  re-evaluates her judgments. By the end of the play, Vivie makes the transition into adulthood-i.e. choosing a profession and lifestyle, which we all find so difficult after we leave the pre-ordained structure of school and college.  During the course of the play the audience is treated to a discussion of some of the great issues facing human beings, some interesting observations about the various forms of exploitation, and an enormous amount of wit and comedy.  Set at a time when women really did have fewer choices than they do today, one realizes both how much progress has been made and at the same time, how little.  ( de facto Equal pay is still dream)

Emily Chisholm as Vivie and Bobbi Kotula as Mrs. Warren delivered stellar performances. Shaw’s plays are language plays and demand wit, sarcasm and expert comic timing, which both actress had in abundance.  In spite of the wit and irony, this play and the relationship between the two characters is completely tragic,  in that it expresses universal parent child conflicts.  Both these actresses were flesh and blood people with all the appropriate feelings of a mother, with a lot to hide, and a daughter torn between conflicting emotions.  Shaw may have written them to make a social/political point but they were real people with real emotional scars.

Richard Ziman as Sir Georg Crofts, Mrs. Warren’s business partner and ex-lover, who decides to propose to the young Viv, played the part of an immoral but perceptive baronet with all the wit, sarcasm and joie de vivre of any hedonistic scoundrel.

In general, although the accents were not perfect, as the minor characters had a few slips here and there, in general, the accents were done well, particularly Ms. Kotula as Mrs. Warren.   She nailed the accent of a Cockney who had learned to speak more or less “proper-like” but when she gets emotional, she slips back into Cockney and drops a few “haitches” ( H’s)  It was highly effective as a indication of her class background and character.

The set was a problem. Center House has a small stage, and there were quite a few set changes within the acts making for technical problems, as a result the set changes slowed things down.  Like All Shaw’s plays, Mrs. Warren’s Profession could just as easily be a radio play, as it is a language play, and the visual element barely mattered, nevertheless, the costumes really were hard to look at.

Vivie’s costume in the first scene was spot on, Severe culottes were just the thing for the “New Woman” as one of their hallmarks was riding the newly popular bicycles. However,  her “playmate” and possible half-brother Frank strolls in with a rifle and an outfit which does not suggest that he has been out shooting.  In general the costumes looked pretty ill-fitting, and just thrown together, the clergyman’s coat was not authentic looking,

However, it was an outstanding, extremely enjoyable production, full of hilarious quotes such as “If you are going to choose your acquaintance on moral principles, you’d better clear out of this country”  Also there isn’t much Shaw around Seattle, and SSC is to be commended for adding Shaw to their repertoire.

Holiday of Errors -or- Much Ado About Stockings
December 8, 2013