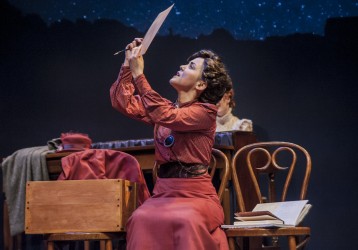 Silent Sky opened at Taproot Theatre January 29. Written by Lauren Gunderson and directed by Karen Lund, Silent Sky dazzled its audience on opening night with a small, strong cast, a dazzling multi-media set and a sharp script that started their 40th season off on a sparkling note.

The play itself uncovers an interesting slice of women’s history I was not previously familiar with. The story centers around Henrietta Leavitt, portrayed by Hana Lass, who works in the astronomy department at Harvard University in the early 1900s and made a discovery concerning the luminosity of stars. Henrietta made this discovery in a day and age where women were not properly given credit for their scientific discoveries. Within the play, Henrietta works with two other women: Annie Cannon, portrayed by Nikki Visel, and Williamina Fleming, portrayed by Kim Morris. The women examined glass screens with stars etched on them. They plotted their coordinates. When they noticed patterns, they shared their observations with the higher up male employees in their department who took credit for their work.

The play portrayed women who insist on asking, earning and demanding they be afforded more opportunities than was customarily normal for women at the time. The head of the astronomy computing department was a proud suffragette, fighting for the right for women to vote. Williamina was a Scottish maid who became a computer for the department. She shares that she dealt with the pain of her husband leaving her while she was pregnant through laughter. Henrietta’s sister Margaret was writing a symphony even though she wasn’t “an angry European man.”

Hana Lass essentially reprised her previous role in Taproot Theatre’s production of The Explorer’s Club last season, where she portrayed a bold woman pursuing a man’s career in a man’s world. She was a believable astronomer. Her strong performance was complemented well with the rest of the cast: Kim Morris was a hoot. Candace Vance was adorable and hilarious and sweet. Nikki Visel had a lovely stage presence and I loved watching her character develop over the course of the play. Calder Jameson Shilling as Peter Shaw was lovable, as confirmed by the woman sitting behind me who uttered, “Awww” after almost every one of his lines. At intermission, I overheard the same woman sitting behind me comment to a friend, “I really love being with these characters.” I couldn’t agree more.

I found Henrietta’s romantic plotline with Peter Shaw to be intriguing, entertaining and heart-breaking. The storyline was particularly intriguing to me because Peter’s love for Henrietta completely transforms him as a character. The play begins where we see a slightly chaveunistic side to him, as was the cultural norm during the time period. But as he falls deeper in love with Henrietta, we see him gaining a newfound respect and adoration for her and for women in general. He adores her mind and spirit and becomes an imperfect, evolving feminist character.

Taproot Theatre continues to impress me with its multi-media sets and its ability to leverage its small and challenging space to its full potential. In this production, a screen splattered with a starry night sky sat as the backdrop for most of the play. Vintage astronomy equipment allegedly used by Harvard researchers in the early 1900s served as desks for each of the women working in the computing department as “computers.” During scenes when Henrietta was in her hometown in Wisconsin visiting family, the screen was a beautiful sunrise, an open field with birds chirping in the background. There was also a beautiful scene on an ocean liner on the Atlantic. Taproot’s attention to detail makes their productions such beautiful sensory experiences. Mark Lund oversaw this production’s elegant scenic and sound design.

There were plenty of great one-liners I scrambled to scribble down in my notebook. “Life is about getting appropriately upset.” “What’s next? Bloomers and whiskey with suffragettes?” “I’ve learned just not to argue with women.” “Wonder will always get us there.”

Time and time again, Taproot produces shows that enchant, that linger in your psyche, that ask its viewers to look critically, compassionately and humorously at the world that surrounds them. I look forward to the rest of their 40th season.