Tall Tales of the Unnatural Frontier 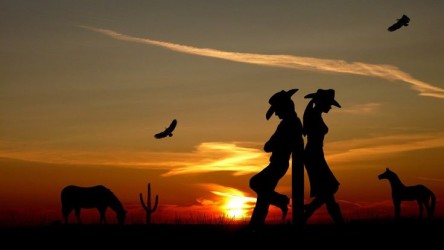 Charming vignettes in the weird and wacky West.

The Annex theatre has so little street presence, you could be forgiven for missing it entirely. This is a terrible shame. As of yet, the productions here have surpassed this reviewer’s expectations. It’s a small space, equipped with a cosy bar and gathering area, and perhaps 70 seats in the auditorium. What it lacks in size and presence, it makes up for in the quality of the acting.

Tall Tales of the Unnatural Frontier is a series of short plays. The underlying theme which connects them is they are all set in the “Old West,” that timeless wellspring of inspiration, in different places and periods. Besides that, the stories stand alone.

Director Jen Moon, head writer Scotto Moore and their team have taken a simple approach with the presentation, likely so as to serve the multiple different locales featured in the vignettes. Somber blue panels occupy the backdrop, creating a kind of “big-sky” horizon feel, and the sets are dressed spartanly. With the exception of some tables and chairs, most of the sets are comprised of cubes of varying size. These didn’t detract from the overall atmosphere at all, however. Paired with a clever little battery-operated fire pit (which elicited a little giggle from the crowd when it was switched on), it all came together well. Some small recognition should be paid to the transitions, which often feature amusing interactions between the players as they move set dressings around.

The real show-piece on display here is the talent of the players, and their abilities in bringing to life the work of some truly talented playwrights. The troupe was small enough that there wasn’t one actress or actor who didn’t stand out. This is an all hands on deck affair, where everyone is involved with each scene  in some way, playing minor roles or even just moving sets. Through their craft, they created some great moments. The strongest aspect of the show was clearly the utilization of comic timing, though some of the segments take a turn for the dramatic to good effect, as well. So as to not ruin the surprise and delight to be had by some of these moments, it wouldn’t do to go into too much detail about any given segment. One must give talent acknowledgment where it’s due.

Sydney Tucker, Lori Lee Haener, and Marquicia Dominguez are the three leading ladies. Each one brings a unique swagger to their portrayal of the tough women in the Old West. Dominguez flexes specifically tough as a no-nonsense brothel madam, and a wife driven to insanity when her husband is lynched. Haener and Tucker feature opposite one another in two equally funny and bittersweet tales, in which no-gooders on the lam search for hidden treasure, and a husband meets his wife’s mother for the first time.

The gents are Tim Gagne, Tom Fraser, Michael Ryan Blackwood, and Drew Hobson.  Gagne and Hobson, in particular, have some killer macho cowboy moments, though all the gentlemen here are versatile as all get-out. Fraser easily had the most fun, often as a dim-witted or frightened “dude,” with particularly deft incoherency. Blackwood, though often playing the straight-man, had some opportunities to bring a queer element to the proceedings opposite Hobson.

In the end, one leaves the show with a feeling of satisfaction. The bite-sized nature of the individual offerings coalesce to create the whole. “Tall Tales” comes recommended to anyone who likes a well-rounded show, though those who come expecting something with more depth may come away disappointed. For this reviewer, though, the whole is certainly greater than the sum of its parts.

Read other reviews by Jasper Loovis