Quirky Buyer & Cellar at the Rep 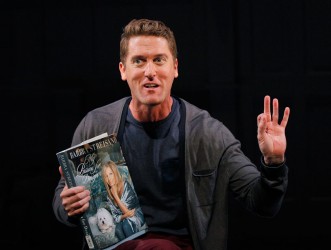 Playwright Jonathan Tolins has created a whopper of a high concept play; a description of the premise tells us just about all we need to know about the work. The setup is an enticing mixture of truth and fiction. The truth: Barbara Streisand really has written a book entitled My Passion for Design in which she describes an underground shopping mall that really exists below her Malibu mansion. The truth: Tolins once met Barbara and she offered him a Kit Kat Bar, which he declined. The fiction: the mall has a special caretaker, the struggling West L.A. actor Alex More. The one-man show imagines what it must be like to have a full time job down there in Barbara’s wacky personal playground.

New York based actor Scott Drummond assumes the role of Alex. Tolins has observed that the play needs “an actor who can make an instant connection with an audience…and who is innately funny.” He has found the exact right person with Drummond. Drummond is spot on from his opening lines and the ninety-minute one-act flies by as he takes on the role of at least half a dozen characters. His most successful moments are when he plays both him and his lover Barry. The scenes come off as an engrossing dialogue.

The set-up is so goofy that early on are we are nearly in Theater of the Absurd territory as Alex spends his long, long hours down below Barbara’s house in something like a Disney Main Street USA from the Twilight Zone amidst the whirring of the frozen yogurt machine and the whirring of the popcorn maker. Alex knows a lot about Disneyland; he was recently fired from a job there when he went off script as a costumed character. The plot takes on a more down-to-earth tone when Streisand comes into Alex’s world. Alex assures us he doesn’t “do Streisand,” but his delivery of her lines helps form a fascinating character foil for the downtrodden young actor.

Streisand is a woman who compromised almost nothing on her way to unimaginable success. She kept her Brooklyn accent; she didn’t fix her nose. She has always been unabashedly Jewish. Perhaps she is a gay icon because she never bothered to hide her real self. Watching her and Alex create an odd couple alliance is the central joy of the evening. As the play develops, the relationship between the two produces a surprising poignancy.

The play echoes a major theme of the 20-teens: the ever-widening gap in our country between the haves and the have-nots. How can someone like Streisand have so much success, accomplishment and wealth while struggling Alex can only pray that his car’s glowing check engine light doesn’t really mean it is going to die soon?

The program notes mention that Barbara has never seen the play; she’s missing out on a very entertaining evening. Director David Bennett has taken this eccentric script and fashioned a solid night of satisfying theater.

Buyer & Cellar runs through November 22 at the Seattle Rep in the Seattle Center. For more ticket information go to seattlerep.org.

Seattle Rep’s The Piano Lesson Hits All the Right Notes
January 24, 2015
© 2021 Drama in the Hood. All rights reserved.
Site Design