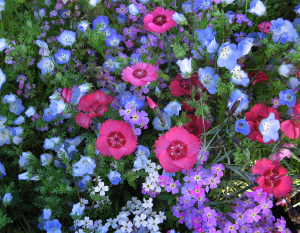 To See or Not to See, What are the Consequences?

Six days after the death of renowned Irish playwright Brian Friel, a truly awesome production of his play, Molly Sweeney, opened in Seattle at Theatre 4, produced by KTO Productions. With an extremely strong language-based script, this three-person stage play could easily be a radio play, as the visual element is almost totally unnecessary.

Which gets us to the basic theme in Molly Sweeney: vision is arguably an unnecessary sense in life. Molly Sweeney, the main character, is a 41 year old woman, who having been blind since the age of 10 months, considers having her sight restored. Based on the research of Dr. Oliver Sacks, the audience, during the play, is enlightened, in the most appealing way, about the neurological development of the brain, the anatomy of the eye, and one of the most ancient of philosophical discussions: perception itself.

The prolonged discussion to have her sight restored by the three stakeholders, her husband Frank , Molly herself, and the once famous ophthalmologist Dr. Rice, created more suspense than most Cecil B. DeMille movies. The script comprises three characters who do not interact on stage, but who deliver monologues all describing their participation in the pre-and post-operation deliberations.

Ironically, Molly seems to be the only one content not only with her lot in life, but also with life itself. Unlike Dr. Rice, who can only feel good about himself, if other people think highly of him, or her husband, who can only feel happy if he is completely absorbed by “THE GRAND PROJECT,” Molly takes life as it comes, and without sight, uses her other senses to experience life to its fullest.

But, when she marries Frank, late in life, she reluctantly agrees to have her sight restored; however, since she had lost her sight so early, she had also lost those critical years of neurological development, during which the brain developed the processes to turn visual sensations into meaningful perception.

After her “sight” is restored, her sense of touch and smell are still far more accurate tools for identifying objects. For example,  she has always loved flowers and can identify them b   The result is tragic for everyone involved, and along the way, we see the egotistical reasons why Frank, her husband, and Dr. Rice pressed for the operation.

Three person plays with no set, no on-stage action, no dialogue and no fancy costumes are not exactly easy plays to direct; however director Yvonne Velez rendered it riveting. I was on the edge of my seat for the entire first act and had to pull out my hanky in the second.

To be commended also are lighting designer Marcella Barbeau and sound designer Dara Lillis, who also played Frank. Too often critics have to endure loud rock music as they read the programs before a show starts, instead, the audience (and the critics) joyfully listened to Irish folk music, one of the pleasures available to the sighted and the unsighted.

All the actors were more than up to the task of making this sophisticated script dazzle. Doug Knoop as Dr. Rice, has a commanding voice and presence, and was well cast as the embittered once-world renowned ophthalmologic-surgeon, whose inner resources are so limited that his reaction to personal set-backs are to immediately reach for a high prolonged dose of Irish penicillin-the whiskey bottle.

Knoop was particularly skilled at delivering the right dialect; he portrayed an Irishman trying to cover up his origins by speaking “posh.” Dr. Rice, having lived and worked in America, spoke American, but occasionally slipped into an Irish accent. Knoop managed these transitions extremely well.

Dara Lillis, a Dublin native, was well cast as the perpetual dreamer, who flits enthusiastically and charmingly from one “Grand Project” to the next, but also displayed real affection for his wife, Molly. Through humor, Lillis managed to convey sympathy and humanity for this not altogether sympathetic character.

Amusingly, both Brian Friel and the actor who played Molly have had the same day job; he taught mathematics before taking up writing full time, Ms. Taggart,s day job is teaching math at the UW. One would never have guessed it as she portrayed a wonderfully warm, happy creature, which through Friel’s language drew us into the special world of the blind. As a result of Taggart’s sublime acting, the audience easily identified with that special world, a world where we close our eyes to block out visual distraction, when we want to carefully listen to music. When speaking about how she experienced swimming, Taggart, as Molly, made us realize that when one embraces a limitation, one acquires a special gift.

It isn’t often Seattle audiences can see something of this caliber. Since Theatre 4 is a small theatre it would be wise to: