Theme One: there is no such thing as unskilled labor. The cast is never idle as there are napkins to fold and prep, floors to wash, dishes to run to and from the tables, water refills, ice refills, knives to sharpen, dishes to wash and put in their places, etc. etc.

Theme Two: the back-of-house is a male domain. We get to know the four men and how they manage the pittance pay they get pretty quickly. Peter (Tyler Treise) calls Harlem home and has worked this job for 4 years and is second in seniority. He’s manning up as a father and contributor to his family. Though it’s going to pinch him financially to take even part of a single day off (no paid leave, no sick pay, no vacation pay, no benefits) when his little girl insists he attend the first day of her summer program, he makes it happen. Peter is also smart and sees how poorly run the restaurant is. To some audience members it might seem odd that Peter is not at a better station in life. For those who have lived under the heel of exploitation and capitalism it comes as no surprise. For example, most non-black Americans don’t know that many Pullman car porters had college degrees. They simply were not allowed to work in positions that better matched their education and abilities.

Theme Three: what you do with your money shows your real attitudes about today and mañana (tomorrow). Jorge (Santino Garcia) has staked the strongest claim on a better mañana. He’s held this job longer than Peter and seems ready to take any shift at any time. He’s scrimped and saved by eating stale leftover food from the restaurant to avoid buying breakfast and living in an overcrowded apartment. To the astonishment of his crew mates, he has $30,000 to build his home back in Mexico. He is living his Mexican Dream—not the American Dream.

Theme Four: you’re on your own, try to make the best of it. Pepe (Chris Rodriguez) has just arrived from Mexico. Like Jorge, he lacks proper papers but is trying to get counterfeit ones. His pay and tips runs through his fingers, and soon he may not make his share of his rent. He’s the newest crew member as well, so he has fewer shifts and is last to be asked to fill in. His dream is to sponsor his brother to come join him in New York. 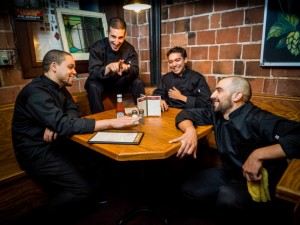 Theme Five: the options you have aren’t very happy ones, still one must chose where you stand. Whalid (Joshua Chessin-Yudin) is third-generation Mexican living in New York. He’s the most energetic of the characters but accomplishes far less work. Jorge tells Pepe that in every circus there’s a clown while nodding towards Whalid. His dream is to eventually move out of his parents’ house into his own apartment and serve his parents a fancy meal there. He wants to be a “professional” with benefits and paid days off and is constantly telling the other guys about opportunities he hears about. In one funny scene he persuades Pepe to pretend to be injured so he can practice his CPR steps while reading from the paramedic manual.

Theme Six: it’s hard enough on everyone when the house is empty due to wealthy people summering elsewhere, but what happens when the management unilaterally stops sharing the shift tips? As Peter asserts to the frightened men, “We’re being sh*t on our faces!” What are their options? Will they stand united? Have they ever been united? Where will each man draw the line to assert his dignity? Is dignity even in the equation? The audience is left to ponder this during a tense two minutes where the cast goes about their work in silent suspense while awaiting word on if they will get their shift tips back. By their postures, glances, and faces we know what they are thinking, we’re also thinking the same things.

The setting by Burton Yuen definitely puts us in the back-of-the-house of a restaurant with two sinks with running water, stainless steel prep tables, knife racks and so on. The audience surrounds the stage on three sides, so the claustrophobic tight-quarters feeling is further enhanced. These men are the working poor, at the bottom of the economic glacier, yet, oddly, the main status symbol is  on their feet in the form of name brand sneakers. Kudos to costumer Kelsey Rogers for hitting the right notes on their dress.

The play is good, but not perfect. The first few scenes are sprinkled with background details about the men. Some of these details could be repeated more often so we can keep the characters’ motives and personalities better pictured in our minds. The actors could have spoken some of their lines louder and with better enunciation. Also, many of the lines are in Spanish, which adds realism, but without a translation for non-speakers that bit of the play is out of reach to much of the audience, including me.