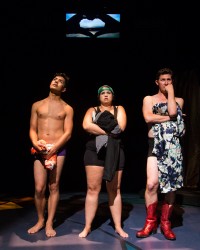 Oz is a magical land. Since 1900 when Frank Baum published the original The Wizard of Oz anyone with the faintest acquaintance with this American cultural treasure will recognize it. Roll that into the gay culture’s fetishizing of Judy Garland and her solo performances, stir in a bushel of camp, pore in a religious cult running a reparative therapy clinic; blend well. What you get is Wizzer Pizzer: Getting over the Rainbow, Theatre22’s production of Amy Wheeler’s 2005 play at the 12 Ave Arts Studio theater. This west coast premiere is peppered with local references.

Camp is self-conscious theatricality—the goal is for everyone to know the actors are Acting, with a capital A. Corey D. McDaniel’s direction allows this energetic cast great latitude to take it up a notch, frequently, and they oblige.

In Wizzer Pizzer, Adrian (Eric Mulholland) drunkenly competes as Garland in the Oz Gay King and Queen contest. His lip synch to Over the Rainbow is a show stopper. After losing and stumbling outside he gets attacked by a pair of homophobes. Later, while watching and calling into a televangelist program run by one Dr. Marvel (the Wizard role portrayed by Lisa Viertel), he falls asleep and dreams.

Mulholland is on the stage nearly every scene of this two-hour performance. Mulholland’s scenes where he acts in counter-synch to a recorded performance of Dr. Marvel are expertly acted though anguishing to watch. He has opened his spare bedroom to Frankie (Rhonda Soikowski), a lesbian who passes as a man. Frankie wins the Gay King of Oz title by impersonating Garth Brooks and easily seduces women into her bed. This contrast to Adrian’s lonely status provides a source of tension and humor.

Chip Wood as Steve Eden, a “converted” gay man, and his “converted” lesbian wife Helen Eden (Alyssa Keene) run their reparative clinic in front of studio cameras. The acting was capable and alert. The Eden family children Blaine (Pilar O’Connell) and Gable (Matthew Sherrill) are not your stereotypical girl and boy, either, so Steve and Helen have their hands full. Soon after Adrian arrives at the clinic Frankie shows up looking for him. Frankie starts seducing Helen (but “it’s so easy it’s not even sporting”, she complains). Steve and Helen’s educational and desensitization techniques are not a match even from themselves as they “relapse” back into their original orientations by play’s end.

Kudos to Set Designer Phillip Lienau for finding clever ways to navigate through the many scene changes demanded by this play. The opening few scenes employed a narrow platform stage on wheel that allowed both quick scene changes and the use of the curtains as, well, curtains, for entrances and exits. Costumes communicated character very clearly, props to Cami Funk for that. The ruby shoes appeared as ruby boots. They made a cameo appearance and were never seen again. There are other loose ends in Wheeler’s script like this which one hopes she resolves in future rewrites.

This production camps it way through some very serious challenges confronting us in Seattle and other communities. Homophobic violence of the physical, emotional, and spiritual kinds (the wicked forces) confront self-acceptance, community, and self-love (the good forces). Finding your way through to fully loving who you are and who you make community with is the way to get back home. But as the villains can’t hold their evil ways together to sustain their attack on gayness, the show loses its dramatic tension and becomes more spectacle than theater.