Act 1 begins as a bedroom farce. A young Egyptian-American couple, Leila (poised, emotionally riveting Alia Attallah) and Rashid (Karan Oberoi as her reluctant and defensive boyfriend) await the entrance of an acquaintance, Doug (hilarious, multi-faceted Quinn Franzen) for what is supposed to be a night of hot three-way sex. And what an entrance it is! Franzen’s naked insouciance catalyzes an unraveling of finely woven veils of concealment, transforming the evening into an emotional battlefield of conflicting needs and expectations – a pretty accurate depiction of most three-ways (if that’s not TMI…) 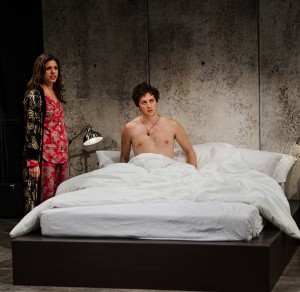 Things quickly go south among the three as details emerge about their respective secrets, deceptions, wounds, and motives. To say much more would be too revealing, but be assured that “Threesome” is not all laughs. As playwright El Guindi states in an interview printed in the program notes, “I think we’re funny as a species…. So even when I stray into dark areas, I still find human behavior weird and comical at times….[My] intention was not to be funny. It’s that the characters find themselves in a very awkward, and somewhat comical, situation. When their situation shifts, so does the tone of the play.” That situation changes moment-to-moment throughout the play, which is one of its many appealing aspects, and though we can laugh at the awkwardness and confusion that prevails in the first half, the disaster that follows is wrenching.

By the second act, Leila’s book is about to be published and reveal her hitherto untold experiences during the 2011 popular uprising in Egypt against the government. As her secret becomes known to both Rashid and Doug, their responses drive the story deeper into raw truth. The complex interweaving of vulnerability and need with harsh and even brutal realities of domination and power are fodder for debate and reflection at the end of this utterly engaging work.

El Guindi’s clever script subtly but pointedly suggests how interpersonal events are microcosms of larger forces in the world — not only between men and women, for example, but among countries and cultures who mutually misinterpret each other’s histories and motivations. Sexual desire stands in for international relations; who’s in or out of bed signals both personal and political realities; dressing and undressing become metaphors for shifting power and purposes. Ultimately, the demand “Give me my clothes!” encompasses the anger, power, and desperation of an entire revolution. It is a testament to the skill of the writer, director, and actors that the underlying story remains viscerally grounded in feelingly portrayed human desire and conflict while barely ever sounding a didactic note. 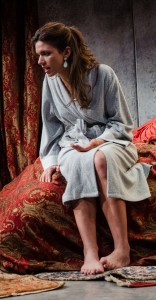 The set design and lighting provide space for the action without drawing attention – a stark industrial backdrop with bed, end tables, a few props in Act 1, then a garish heap of rugs and “eastern bazaar” props for the book cover photo-shoot in Act 2 – and that’s it. Costumes – or the lack of them – send signals, too, capturing our modern era in both cultural worlds. This is not a gimmicky production, but a confidently acted and directed rendering of a new script that, despite one or two uneven seams, entertains hugely, and with profound emotional impact.