“Dirty” is as dirty does 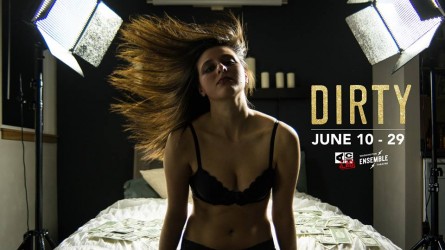 America is a dirty slut. There, I said it.

Or… could they mean “us?” WET co-founder and director Michael Place rubs our faces in the greed, cynicism, and desperation at the heart of a 21st century America that will turn any trick, break any rule, betray any truth, and fuck anything that gets in its way or helps it to another capitalist orgasm. The production at ACT is a slick, dark satire that strains credulity while delivering a soul-satisfying kick in the ass to the self-righteous.

Not that anything about “Dirty” seems really unbelievable. In rapid-fire sequences a story unfolds of a husband and wife, pregnant with their first child, pooling careers and income in a cut-throat world of corporate plunder on one hand, and philanthropic do-good-ism on the other. The hapless but crafty, quick-thinking husband, Matt, abruptly resigns his position as a corporate shark over a bit of “douche-baggery” that crosses some kind of moral line for him. 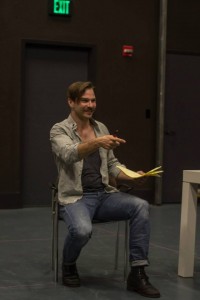 His wife Katie is understandably upset by this, with a house to lose and a baby on the way, and in a gradual turnabout from her philanthropic work in defense of young women, is swayed – within certain rules – to support Matt’s brainstorm of starting an ethically defensible pornography company that will go viral by dedicating a share of its profits to philanthropy.

Matt (endlessly watchable, vibrant Anthony Darnell) returns to face down his ruthless boss Terry (Ali Mohamed el-Gasseir, whose pure, delightful amorality repeatedly forces others to redefine their values.) Matt is outmaneuvered until Act 2 when he and his former nemesis join forces on the multi-million-dollar enterprise, over the protestations of Katie (sharply and sympathetically portrayed by LoraBeth Barr.)

Andrew Hinderaker’s outrageously clever script, workshopped through ACT’s Contruction Zone play development program, is a lean and compact marvel, though slightly over-filled Act 2 demands some deep suspension of disbelief and even comprehension toward the end. But one forgives readily, seduced by the total commitment of the actors and of their characters – people like us, prowling the jungle of modern America on the lookout for the next “big game” in which to make our win-all/lose-all play. 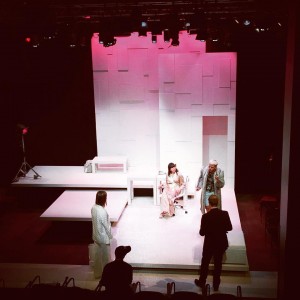 Michael Place and his design team achieve a visual and narrative fusion of love and lust, altruism and ruthless self-interest. The MacStore-white set is squeaky clean, its stark rectangles and split-page effect handily suggesting a double moral spreadsheet, and framing one crisp episode after another like panels in a graphic novel page-turner. The vibrant lighting design manages to keep pace with swift-changing times and locales and dialogue that jumps in an eye blink between the dream-skewering business world to tender – or not-so-tender – moments of intimacy in the home.

The interweaving of these worlds is the structural spine of the show, closing in on the divide between what Matt and Kate profess to value and what they are in fact willing to do to achieve their goals. This “integrity gap” narrows relentlessly, forcing Matt to a moment of truth where all options have expired except final and utter betrayal, or loss of everything he has sought to gain and to love. I leave it to you to imagine your own response faced with such a choice, and to contemplate the countless ways such moments are part and parcel of the fabric or our lives and our society.