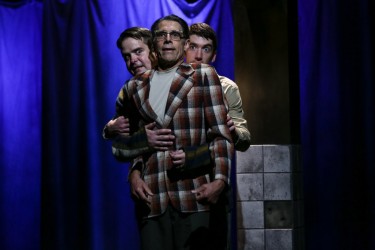 Kurt Vonnegut’s classic Slaughterhouse-Five has to be one of the more unwieldy narratives ever to be brought to the stage. The tale involves multiple points of view, time and space travel and a long piece covering the devastating and controversial bombing of Dresden. It became a forgettable motion picture back in 1972, but now has reemerged as a compelling theater piece adapted and directed by Josh Aaseng for Book-It Repertory. This production’s success largely rests on the astounding effectiveness of Vonnegut’s language. For through all the story’s explosions, horrors and confusion, it is Vonnegut’s unique voice that drives the play to some breath-taking heights. Book-It’s theatrical style ensures we hear the novel loud and clear all the way to the final questioning bird tweet that ends the show, “Poo-tee-weet?”

One of the sharpest ideas for the production is having the protagonist, Billy Pilgrim, being triple casted. Robert Bergin plays him as a young GI captured by the Nazis during the last days of the war; Erik Gratton is Billy the befuddled optometrist kidnapped by aliens and forced to live in their zoo on a far off planet, while Todd Jefferson Moore is the older Billy, slowly slipping away from our earth and its concerns. Billy’s fragmented life acquires a tangible presence with this unique casting. An early highlight in the play is Gratton’s monologue describing watching a war movie backward, complete with planes gathering deadly bombs into their wombs.

Jim Gall employs an apt world-weary charm portraying Vonnegut the author. It is his character’s task to set the narrative in motion and occasionally provide commentary highlighting the insanity of a human race seemingly focused on blowing itself off the planet.

Sydney Tucker does solid work as the exotic actress Montana Wildback. Late in the play, a quiet casual scene between her and the kidnapped Billy provides a needed respite from the high-energy absurdist doings of the show. If the work has a fault, it is a lack of more substantial material for the other women in Billy’s life.

The fast paced show can be a bit confusing at times with its multiple story lines popping in and out, but somewhere in Act II it imperceptibly links together, delivering a strident plea for sanity in a world that seems to be spinning off its axis. The theme is easily as important today as it was when the novel first appeared during the height of the Viet Nam War in 1969.

Slaughterhouse-Five runs through July 3 at the Book-It Repertory Theatre, at The Center Theatre 305 Harrison Street, right in the middle of the Seattle Center. For ticket information call 206-216-0833 or go to WWW.Book-It.Org.