Weighed Down by Mud: A Plea for a Decent Life 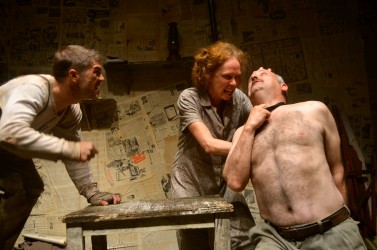 John Kazanjian and his production partner Mary Ewald have put Mud back into Seattle’s theater mix. In 1991, Maria Irene Fornes, Mud‘s playwright, directed the play for New City Theater. It was Fornes’s preference to direct the first production of her plays because she would finish her rewrites during the rehearsals. Under Kazanjian’s direction this time, the play has a continual feeling of roughness, and lack of completeness, which is congruent with the themes of the play. The company did a terrific job using Fornes signature pause at the end of each of the 17 scenes. This stop-motion tableau slows down time and allows the audience a break to absorb and feel the impact of such bereft lives. Seventeen is a prime number, and variations of the root concept of prime, such as primal, primacy, and primate, can be found in every scene.

Mary Ewald as Mae does a particularly touching job of drawing our sympathies to a dirt poor white woman who is living in the barest of shacks with hobbled together wooden floors and newspapers for wallpaper. Kudos to Set Designer Charlie Rathburn for evoking a feeling of 1930’s dust bowl America. She takes in ironing to earn money. Her live-in male mate, Lloyd (Tim Gouran), is sick with a disease that affects his genitals and makes him impotent. Gouran and Ewald are a lively pair in the first few scenes, verbally sparring and cussin’. These first scenes could have been sharper to show their mutual fatigue with each other amidst the hard lives that is their fate. These are folks trapped by their dirt-poor poverty, Mae knows it, and Lloyd keeps interfering with Mae as she tries to work her way out—literally. She irons and she’s going to school. Perhaps if she finds her way out through learning she will land on that first step out of the mud of her life.

There are clever details with costuming and lighting (by Nina Moser and Eve Cohen) that add realism and sharpen a scene’s impact. In the opening scenes, Mae and Lloyd are barefoot, they argue about his illness with Mae insisting he go to the clinic. Lloyd refuses. Mae has shoes on, though, when she comes home after walking to the clinic herself to talk with them about Lloyd. Though the characters freeze at the end of a scene, Lighting Director Lindsay Smith will brighten a spot to highlight something in the tableau to etch it in our minds.

Mae can’t read well enough to understand the flyer from the clinic. She has invited Henry (George Catalono) to read it to them.

Henry arrives in a suit and reaches for his glasses. Mae confesses that the flyer is “advanced” and she’s still an “intermediate” reader. She can’t see that Henry is just a bit ahead of her in the reading department. Henry first mouths the text to himself and then mostly bumbles along through it. He sounds out most of the words reasonably well, but doesn’t know what any of the longer words mean. He advises Mae to get a dictionary with “a lot of technical definitions.” Mae falls for Henry, confessing to him of her love and adding “I want your mind.” They kiss. Freeze scene—tableau. 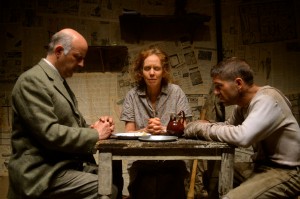 Consider what Fornes has set up—a female breadwinner living with an impotent man, who we learn her father brought home so she would have someone to talk to as a child, and a second man entering the house with just enough intellectual skill to impress Mae. There are two main contests, namely, which of the males will dominate, and which of the males will supplant Mae as the Alpha leader. Mae, of course, has no intention of being supplanted. All of the actors are top notch, and at various times each reveals a touch of vulnerability within the high stakes competition for power and dominance.

We can sense how this might end, but watch anyway as these tensions are played out. The theft of money becomes a repeating theme. Fornes uses some of the reading lessons Mae is working through about starfish and hermit crabs as metaphoric symbols with clues to the drama that is unfolding. It’s all so terribly hard and sad on these characters, Mae, even pleading in a one-sentence soliloquy, “Can’t I have a decent life?” This is the plea of poor people everywhere and for all time. Fornes and New City show us how very, very, very hard it is to climb out of the mud.