Four Dogs And a Bone is a Snarly Delight 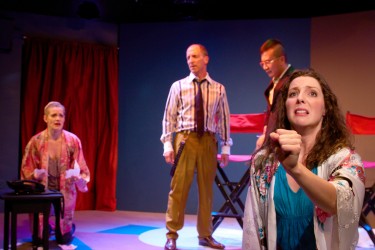 What Theater Schmeater has done with John Patrick Shanley’s 4 Dogs and a Bone should be enshrined as a movie. It begs for permanence so that one can return and savor its delights. Alas, this sharp, biting, witty, and funny gem is theater, not a movie, so go see it live. Be alert to all the clever funny nuances director Julie Beckman unearths in the script. This isn’t too hard, when the audience laughs or gasps—that’s your cue to join in.

Who are the four dogs, what are they fighting for and what are they fighting over? Shanley uses the first act to let us know in two scenes, each with two of the characters. Opening words, Act 1, Scene 1: “I’ve been incested,” spoken by Brenda (Brenda Joyner) to Bradley (Paul Custodio), as she spews out a confession of trauma and trials that is well rehearsed. Bradley is not buying it. As the producer he has his own issues: the script/movie is over-budget. He only has $5 million and the project as currently written requires $8 million. Brenda, as only a supporting actress in the script, wants her role boosted. Plus, both agree the movie has to be “saved” by changing the ending. Bradley tries to persuade Brenda that the director (who we never see) is “weak” and incapable of making the hard decisions called for. Their best chance to save the movie must therefore focus on the writer.

Brenda got the role because a successful actor is her step-brother. The producer Bradley wonders if she might ask him for money for the movie. Brenda has what she claims are 10 pages of single spaced notes on the script from William Goldman. Goldman wrote Butch Cassidy and the Sundance Kid. That’s quite a coup, if true.

Bradley has an smelly, runny ulcer on his ass  the size of a shrimp (fair warning, this play contains content of an adult nature). Custodio and Joyner relish their roles and Beckman has blocked their movements to use all of the tiny stage. They connive to cut the role of the star and on how to persuade the writer to change the ending. We’ll meet them in Scene 2.

Between scenes the audience is shown the dailies from the movie. This is a clever innovation. Meanwhile, the stage hands rearrange the set from an office to an actors’ bar. Set Designer Kasia Różańska keeps the sets simple yet evocative of the settings of the scenes.

Scene 2 finds Victor (Ray Tagavilla) and Collette (Elinor Gunn) in a bar in a chaotic conversation about many things. Collette wants the ending changed to her character saving the dying boy. Victor wants to leave the ending alone, telling her “the heartbreak of life is real. Grief is real.” Collette finds Victor “attractive” and Victor counters by asking if she wants to suck his dick. Victor’s distracted and subdued demeanor we learn is his grief at his mother’s recent death. Collette feels this movie is her last best chance to escape from being always cast as a character actor. She wants the leading role in her next film, and changing the ending with her saving the boy would be just the thing. Tagavilla and Gunn play well off each other, one’s a light, though a dimmer one at the moment, and the other is a moth attracted to it.

Everything is currency in the competition for what each character wants: the women use their sexuality and other charms; the men their positions as producer or writer.

After the intermission we enjoy the fun of watching Brenda and Collette in their dressing trailer circling and snarling at one another. Shanley closes out the play by bringing all four characters together and trapping them under a shed while a downpour spoils their day of shooting. To cut costs Bradley had not bought weather insurance. What to do? He calls Victor from his mother’s wake to discuss how to cut that scene out. Victor is not pleased. Brenda arrives with running mascara and upset because that day’s shoot was to be one of her bigger scenes. Collette eventually arrives very angry because Brenda had locked her in the trailer. There’s physical comedy and sight gags plus sharp writing. From watching this play about the around and behind-the-scenes battles being waged in the making of a movie it’s a marvel anything gets “in the can.”

Four Dogs and a Bone by John Patrick Shanley, directed by Julie Beckman. Theater Schmeater. 2125 Third Avenue. May 29 through June 27, Thursdays, Fridays, and Saturdays at 8 PM. Tickets from schmeater.org or 800 838.3006. Closes June 27.