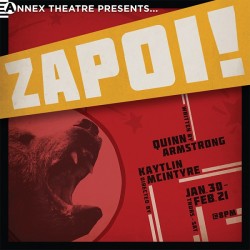 The famous quote by Frenchman Jean-Baptist Karr, which translates as “the more it changes the more it stays the same”, could have been the subtitle of Zapoi, Quinn Armstrong’s interesting original script, which opened on Friday, January 30 at the Annex Theater.

Zapoi opens in the year 1992, in a village in the Ural mountains, in the early hours of the morning, when all the town drunks are sleeping off their hang-overs.  In many ways, it resembled the opening scene of Maxim Gorky’s Lower Depths, in which the Russian affliction of alcoholism circa 1901, also plays out against a backdrop of poverty, hopelessness and fear.

The ponderous Russian national anthem plays as a superb voice-over, by Alex Mathews, comes on and “persuades” us to turn off our cell-phones, pay attention and tells us what to think.   Mr. Matthew’s voice sent chills down my spin because his controlling voice strongly reminded me of the voice of the computer Hal, in the Stanley Kubrick movie 2001 A Space Odyssey.

Although the residents of the village inhabit the same physical space, they do not inhabit the same temporal space-they are all living in different historical eras.     There is an Orthodox priest, born in the 1700’s, Pericolo, a barista living in 2014, Sobaka, a heroin junkie living in 1992, just after the break-up of the Soviet Union.  Of course there is an overbearing early Bolshevik, Alexsei, spouting orthodox Marxism, circa 1914.

Played expertly and passionately by Frank Lawler, the main character, Kiril is a 40 year-old internationally celebrated composer, living in a very dangerous time in Russian history- 1950.   World War II has ended  but Joseph Stalin, First Secretary of the Communist Party,  has not yet died. Although the purges of 1938 were suspended because of the war, they were resumed in the late 40’s.  Unbeknowst to Kiril, he is about to become a victim of yet another purge.

In the first act, the characters from the village, plus Kiril’s friend Anna, played by Jodi Montes, a great war-heroine herself and retired poet, all interact causing confusion, but also revealing some truths about the triumphs and disappointments of the 1917 Revolution.  Through the interactions of  these highly eccentric characters,  the different historical eras collide.

A loose plot evolves, when Kiril connects the dots that Anna, one of his most trusted old friends, is in fact in an agent of the secret police. She has been trying to get him to lay low in the provinces rather than go back to Moscow, where he will be faced with an impossible dilemma:  either co-operate with party propaganda or risk having his highly successful opera shut down.

Towards the end of Act One, everything lost focus.   The interaction of characters from different historical era as a vehicle to ironically explain the sweep of history, which had worked well was changed.   Disastrously,  the script disintegrated into a repetition of George Orwell’s 1984 and Arthur Koestler’s Darkness at Noon.

Act Two took place in a Soviet prison where, bit by bit, a party hack wears down Kiril’s  physical and moral defenses until all his humanistic values disappear resulting in his total corruption.  This was done with a lot of repetitive, unnecessarily violent scenes, shouting and bad language.  Predictably,  a lot of clichés appeared randomly.  In short, after being utterly fascinated by Act One , I was disappointed by Act Two.

In terms of the production; however, I cannot praise it enough.  Catherine Cornell’s set design really did suggest a shabby Russian village; at least it suggested the Russian villages I saw in 1979, during the Soviet era.   The scary sound effects by Alex Potter and effective lighting by Ryan Dunn certainly added to the menacing perplexing atmosphere.

There was also a superb cast headed by Frank Lawler, as Kiril, who had just the right amount of moral and social superiority, which the feted Soviet intelligentsia had.  Kayla Walker as Oksana, the secret police operative, who cracks him, acted with a keen wit, seductive cynicism and absolutely no moral compass.  Her costume, in particular, by Arin Larson, was extremely effective; externally Oksana was attractive, stylish and for a while at least, her appearance hid her lethal personality.

I would recommend Act One, but if you are squeamish about violence, I would leave after the intermission.  Clearly, Quinn Armstrong is a talented playwright, who wrote some excellent dialogue. However, a good re-write would turn this into a first-rate script.

In my opinion, there is enough repression going on in Russia today with ex-KGB agent  Putin at the helm, which was worth mentioning as much as Stalin’s repression.  After the optimism of the 1917 Revolution, hopes were dashed by the repression of Lenin and Stalin; so too has Putin set about extinguishing hopes for a democratic Russia after 1990. Perhaps, the present historical era needs to be thrown into the mix in this play with a fascinating premise.