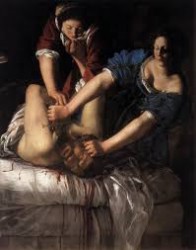 Blood/Water/Paint, by Joy McCullough-Carranza opened on Friday at Theater-off-Jackson.  Produced by Live Girls!, a company dedicated to new works by women, it was didactically written with a supposedly feminist agenda.  However, this story about Artemisia Gentileschi, did not seem to attempt to “empower” women but seemed to emphasize their victimhood.

The subject was an event in early life of the Italian woman Artemisia Gentileschi ( 1593-1656), a female Baroque painter slightly younger than Caravaggio, who became one of the most celebrated painters of her time in Florence, Rome and Naples.   Unlike many of the male painters of the time, who under the patronage of the Catholic Church, painted Biblical scenes with serene looking women, Artemisia choose to paint female Biblical characters as anguished characters, depicting realistic representations of the emotions they would feel in violent situations.

For inspiration, the play claims, Artemisia drew on the anguish she experienced as a 17 year-old, who was raped by a colleague of her father, hired to teach her artistic perspective.  In real life, after overcoming the rape, Artemisia married, had a child, supported herself, made a name for herself in the art world, collaborated with other artists, travelled; in short had a fulfilling professional and personal life.   But, the playwright chose to concentrate on her victimhood, as a dependent female in her father’s household, rather than celebrate the success she was able to achieve, in spite of a devastating trauma.

Designed by Robin Macartney, the play opens with a gorgeous set, representing Artemisia’s studio.  Lush red curtains represent the walls, and enormous ornate gold frames stand on either side of the stage.  These two colors together are simply delicious and suggest the opulent extravagance of the Baroque period.  While the audience was waiting more than fifteen minutes for the play to start, beautiful Baroque music played in the background, creating a relaxed creative scene.  Dead center was an easel, brushes, oil, water and dyes cluttering the studio along with some unfinished canvases.  One is Susanna and the Elders, another is Judith slaying Holofernes.

Judith, an old testament character, was a sexy widow, who beheaded the general of an Assyrian army besieging her village, thereby saving her people-the Jews.  Susannah, was a virtuous woman, wrongfully accused of adultery by two lecherous Elders, who spied on her innocently bathing in her private garden, tried to get her to sleep with them, and then accused her of adultery.   She was about to be stoned to death but valiantly defended herself.  The two large frames in the studio represent these painting with the figures in the paintings coming to life on stage and acting as her muses and support group.  These two strong women, convince her to heal herself by expressing her trauma in her art.

The production suffered from having a poor confusing script with stilted dialogue, which did not match the style of acting, ineffective double casting, costuming that did not support the double and triple casting,  and some poor directorial choices by director, Amy Poisson.   The actors moved around the stage awkwardly, especially during the entrances and exits. The otherwise talented cast floundered in a performance with one dimensional characters, little comic relief, clichés, telegraphing and extraneous material which did not advance the plot.

Particularly damaging in this highly digital age was the lack of PowerPoint to depict the paintings.   Nowadays, playwrights and directors can write effective plays about painters which were not possible even 30 years ago, when only film could deliver the necessary visual experience.      To write a play about any artist especially such a ground-breaking one like Gentileschi, without showing her paintings seems very lame.  The paintings in the lobby and the small canvases on stage just did not add a visual dimension matching the caliber of Artemisia’s paintings.  If a playwright cannot create a visual experience on stage, it is best to write a radio play.

As far as the subject matter, in my opinion, feminism does not need another story about a victim; it needs a story about overcoming difficulty and triumphing.  Perhaps the playwright should scrap this play as the back-story and start writing the empowering experiences Artemisia had, not the victimizing experiences.