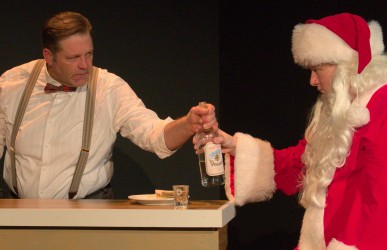 There is a fifth dimension beyond that which is known to man. It is a dimension as vast as space and as timeless as infinity. It is the middle ground between light and shadow, between science and superstition, and it lies between the pit of man’s fears and the summit of his knowledge. This is the dimension of imagination. It is an area which we call the Twilight Zone.

As unknowable as this fifth dimension is, seemingly everyone is familiar with the 1959 television series that explored it. Discomfited by my own lack of knowledge, I bravely ventured forth into this unknown realm and attended Theater Schmeater’s opening night of The Twilight Zone: Live! To all of my fellow Twilight Zone virgins, I recommend that you do the same.

Long-time fans will need little encouragement to attend this live production of their favorite show. In a theater as compact as the New Schmee, laughter is especially infectious; and it was clear from the apparently random booming laughter of last night that I was surrounded by die hards: they were not laughing at any joke (or else I would have been able to join in), but rather at the parody of the typical Twilight Zone conventions. In this way, experiencing this show was comparable to a virgin exposure to Rocky Horror: you probably won’t understand what’s going on, but observing the enthusiastic involvement of the audience is a second (and amusing) show of its own.

Created by Rod Serling, The Twilight Zone originally aired from 1959 to 1964. The American anthology series included fantasy, science fiction, horror and the supernatural. By populating his shows with average people living ordinary lives, Serling eerily insinuated that anything that can happen to them can happen to us, too.

Comedy reaches its height with the escalation of paranoia in the second episode, “The Monsters are Due on Maple Street” (first aired March 4th, 1960). When a supposed meteor is spotted flying over Maple Street and the electricity and other everyday appliances subsequently stop working, suspicion leaves no one to be trusted. What ensues is a lesson on human nature: Just stop their machines and throw them into darkness for a few hours, and people will invariably “pick the most dangerous enemy they can find, and it’s always themselves”

The show ends on a festive note with “The Night of the Meek” (first aired December 23rd, 1960). Although eliciting fewer laughs than “The Monsters,” this episode offers both comedy and warm Christmas spirit with its insistence that miracles really are possible. Brian Simmons plays an excellent drunk and dejected department store Santa, with lines like, “I can either drink or weep, and drinking is so much more subtle.” Ultimately, however, the message is a positive one, affirming that “there’s a wondrous magic to Christmas” and “there’s nothing mightier than the meek.”