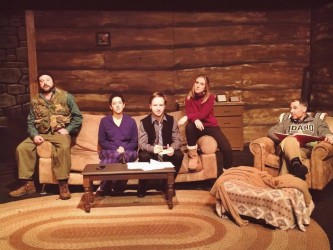 If Men Could Get Pregnant, Abortion Would Be a Sacrament.

One of the best subjects for humor in life as in comedy is hypocrisy.  One of the most embarrassing situations for politicians, espousing the right-wing social agenda, is the behavior of their children, which can seriously derail their careers.  Written by Jim Moran, Fangs, which opened at Eclectic Theater on Thursday, exploits this subject with humor and a certain amount of Who’s Afraid of Virginia Woolfe style alcohol-induced aggression.

Using Eclectic theater’s small space to best effect, Fangs takes place in a cabin in the mountains of Idaho in the middle of a blizzard, as Riley Perkins, an ambitious state senator is holed up with his second wife, Karen and Tobey,  his Mormon chief of staff  (NB.  The Mormon population of Idaho is 60 % and our “hero” is Roman Catholic)

Instead of relaxing, the handsome and manly-looking Riley, is on the telephone making deals,  trying to set up interviews with the RNC to run for the U.S. Senate, when who should walk in, but Madison,  his 19 year-old daughter from his first marriage.  Having hitched a ride with the local Animal Control and Wildlife Officer, Ed Ledbetter, she introduces a down-to-earth local into the mix of toxic resentment.

A right-wing politician’s version of hell breaks out, as his daughter threatens to “out” him by revealing both her secret past, as well as  his participation in it, thereby derailing career.  Bickering ensues, all in front of non-family members, who could potentially squeal to the political hierarchy, or even worse to the media.

The dialogue was incredibly funny, with a lot of witty remarks, and jokes about family tension, politics, and the pathetic nature of news reporting.  Rachel Anne Godbe’s performance as Madison, was reminiscent of something out of the generational conflicts of the 1960’s.  She did not let one opportunity slip to annoy her father, challenge his values, rub her mistakes in his nose and antagonize her stepmother.  All of this was delivered with excellent comic timing, wit and endearing adolescent energy.   As a family, none of them seemed to have heard of the concepts of tolerance, detachment or selective deafness.

Shane Regan, TPS’s much loved web-wallah, played Toby, with great comedic ability, his facial expression and comic timing were superb.  Ashley Bagwell, as Ed Ledbetter, the backwoods Animal Control officer, was the deadpan comedian who stole many scenes with his dry wit and outsider’s perception ( and misperceptions)

Although this was an incredibly funny, witty, insightful play written by a playwright, Jim Moran, with a talent for dialogue, structurally there were some flaws.  The exposition went on for too long, and jarred the audience rather than pulled them in, the play lacked a clear focus, it was unclear what the objective was, the plot was muddled and extraneous elements were thrown in at the last moment, which had not been properly developed.

However, it was an enjoyable highly entertaining evening and the playwright clearly is going places.  Perhaps his next play will poke fun at the hypocrisy of the  left.  Lord knows there is plenty of fertile ground in Seattle for material..

Bright Half Life: New Representations of Time, Space and Love
February 27, 2017
© 2022 Drama in the Hood. All rights reserved.
Site Design