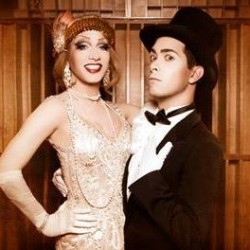 The Vaudevillians, ladies, gentlemen, and others, is what drag is all about.

Jinkx Monsoon and Major Scales are back in Seattle with their astronomically popular musical review ‘The Vaudevillians.’ In this show, Kitty Witless (Monsoon, or Jerick Hoffer) and Dr. Dan von Dandy (Scales, or Richard Andriessen), freshly thawed after nearly a century frozen alive in Antarctica, awaken to find their classic twenties Vaudeville numbers bastardized in the hands of contemporary pop stars. They then territorially share the ‘original’ versions of such old-timey classics as ‘Piece of my Heart,’ ‘Toxic,’ and ‘I Will Survive.’

Let me first say this of Jinkx Monsoon (Jerick Hoffer): I’ve seen several iterations of this production, and never before has she looked this immaculate. The make-up! The costumes! Somehow channeling an improbable combination of Bette Midler, Patti LuPone, Carol Channing, and Jennifer Saunders, her stylings have gone from charming and surprising to absolutely on-point, with a jagged edge of self-awareness. It is a rare experience to attend the theater and find yourself breathless with laughter. Hoffer and Andriessen are not only charismatic, quick, and manically energetic on their own, but their ability to share a stage in waterproof synchronicity is indicative of immense skill, generosity, and a closeness that radiates. This production is characterized by relentless sarcasm about the state of social justice, the nature of Seattle, and the realities of show-business. And although it is relentless, it is, at its core, warm. “The thing I love about Seattle is its diversity. It has everyone. White people… everybody!” Hoffer mercilessly provokes the audience, always with a loving wink. Andriessen, as the not-quite-straight-man, is a constant eruption of tirelessness and creative energy.

It is actually difficult to decide what makes this show more fun: the numbers themselves, or the chatter in between. The jokes are outrageous and just self-aware enough to balance out their occasional absurdity. The on-stage relationship between the two characters is rich and complicated, despite the show’s slapstick veneer.

The musical numbers, arranged by Andriessen himself, are convincing adaptations of modern pop-songs suited to pre-depression-era aesthetics. Everyone loves a good pop-cover, of course, yet there is a peculiar delight in hearing familiar songs in such a way that harkens back to when music was a little dirtier, a bit wilder, and a lot more personal. With only a piano and a tweaking of a key signature here, a syncopation there, Andriessen deftly creates brand new musical experiences with beloved material. And oh, can the man play. And Hoffer’s got a vocal range that would make Christina Aguilera blush with envy.

The set, by L.B. Morse, consists of a beautifully hypberbolic array of vintage trunk suitcases, an upright piano, a chaise longue, and other perfectly anachronistic furnishings. Honestly, there’s not a complaint to be had about this production. Like much of drag and musical theater, it’s loud, frenetic, and grandiose. Uniquely, however, in The Vaudevillians, these qualities serve as vehicles for improbable nuance and sensitivity.

Not to be missed.

The Vaudevillians, by Jinkx Monsoon and Major Scales, runs Wednesdays through Sundays until November 2, at the Seattle Repertory Theatre (155 Mercer St, Seattle). For tickets, visit http://www.seattlerep.org/Buy/Tickets/Production/4675