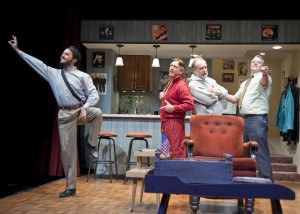 A tuneful concoction, as light as a lemon meringue pie, is served up as Taproot’s concluding production for their 2014 Mainstage Season. The Fabulous Lipitones was co-written by John Markus and Mark St. Germain; both worked together years ago on The Cosby Show. Act one in particular utilizes the sitcom recipe of stock characters volleying one-liners back and forth, but before the night is over the show finds a more solid footing as it addresses racism and ageism in 21st century America.

For such generally frothy doings, the play oddly begins with a funeral. The Fabulous Lipitones have lost their lead singer, and the barbershop quartet is about to call it quits until they stumble upon Bob who can save their day. Alas Bob’s real name is Baba Mati Das and he proves to be a difficult fit for these good old midwestern boys. UW graduate Brad Walker plays Bob and glows with a megawatt smile and energy to match. His traditional folkdance is a highlight of act two.

Jeff Berryman, John Patrick Lowrie and Greg Stone round out the quartet and their solid performances raise the level of material considerably. They all work hard to glean substance from set-ups that could easily, at times, fall into trivial nonsense.

The highlight of the show is the four blended voices, singing out seventeen barbershop tunes. The four guys harmonize wonderfully and somehow the sum product is much bigger than the actors, and for that matter most of the dramatic doings. It is hard not to smile when The Lipitones go into a smooth “Every Breath You Take.” The wacky world of barbershop provides plenty of comedic fodder for the play as well.  The competing groups are named the High Colonics and The Sons of Pitches. Even the Lipitones name has a funny back-story, for it is no coincidence it sounds like a cholesterol fighting drug. The group’s choreography, put together by Gurvinder Pal Singh, is a hoot. Clocking in well under two hours, the evening slips away as gently as a late summer breeze.

The Fabulous Lipitones runs through October 18. Directed by Scott Nolte; music director Christopher D. Littlefield. Friday nights feature free concerts in conjunction with the show at the adjacent Stage Door Café. Box office: 206.781.9707 or use the Taproot website at www.taproottheatre.org. The Taproot Theatre lies in the heart of Greenwood at 204 N. 85th Street.