The Beauty of Noh: Tomoe and Yoshinaka 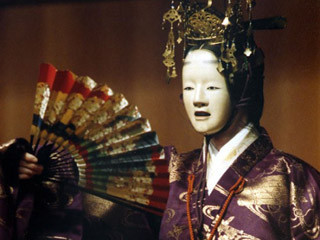 In many ways, there can be no two cultures more different, creating personality styles diametrically opposed to each other, than Japan and the United States.  Americans are physically and verbally spontaneously overly-expressive while compared to us, the Japanese are extremely reserved.  This reserved characteristic is noticeable in The Beauty of Noh: Tomoe and Yoshinaka, currently at ACT Theatre, performed by Munemori Takeda and the combined Kanze, Fukuoh, Kou, Kadono and Issou Schools of Noh.

The actors and chorus of Tomoe seemed incredibly reserved with no facial expressions and only very stylized deliberate movement; however,  they expressed themselves with an almost magical vocal quality, enthralling the audience with a poetic recounting of the ancient Tale of Heike.    Recounting an  event from the Genpei War from 1180 to 1185,   Tomoe, a female samurai,  was banished by her beloved lord and master, Kiso Yoshinaka, on his deathbed after a battle.  Although the presentation was so very different from Western traditions, the universal archetype of the woman warrior clearly transcended cultural boundaries.

In keeping with the Noh tradition of men playing women, Munenori Takeda played Tomoe with other members of the Takeda family playing the chorus.   One of the interesting things about the “orchestra” was that the human voice was used as an instrument, with some of the drummers making vocal sounds, which at times helped create the “set” as they sounded like the animals in the forest.  The chanted poetry was translated into supertitles.

The second half of the evening was the opera Yoshinaka inspired by the same tale, but written by a contemporary composer, Garret Fisher, with a libretto by Amy Schrader, Fisher and Matsuo Basho, about Tomoe after Yoshinaka’s death. United in a temple as spirits, Tomoe is played by Jordan McClellan, Yoshinaka by Matthew Richarson with Munenori as Kannon.  The Poet, a fabulous tenor, was played by José Luis Munoz.  Sung both in English and Japanese,  it was very difficult to understand without supertitles, but it almost did not matter, because the beauty of the singing, and the majestic manner in which Munenori moved on stage, or even just stood still, was incredibly breathtakingly beautiful.

Jay Rubin, Professor Emeritus of Harvard University, spoke a few words about Noh Theatre beforehand, which were most informative.  Dating back to 1300, it is the oldest continuous theatre tradition in the world.  The tradition has been handed down from father to son-master to apprentice- and often the apprentice starts learning his craft as young as three years old.  For example, the Kanze School was founded in 1338 and its performers are still in the same family.  For anyone interested in the history of theatre and its mysterious connection to religious ritual, seeing this traditional production of Noh is highly enlightening.   Seeing how that tradition inspired a modern Western opera, on the same night, is a unique experience not to be missed.