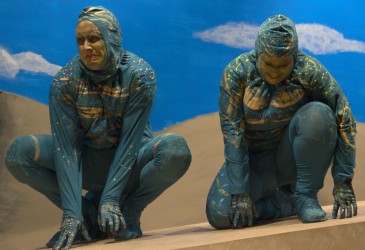 Edward Albee’s play Seascape opened at Theatre Schmeater this past weekend.  Written in 1975, it seemed incredibly dated, but dealt with one of  Albee’s favourite themes-conflicts between married couples.   However,  in this play the conflict is not of the pathological alcohol-induced variety, as in his more famous play Who’s Afraid of Virginia Woolfe, but rather the problem all couples go through at mid-life when they have to reassess their own individual lives in relation to their married lives.

The play opens at the beach with Charlie and Nancy as two New Yorkers in their 50’s, on vacation, alone without the kids. The first phase of their marriage, that is to say, careers and raising children, has gone very well.  Now, they have to decide what is next.  Like many couples, they encounter personality differences-he likes to read Proust-that is to say, he is more contemplative, and just wants to rest.  The wife Nancy, wants more adventure.

The specific discussion revolves around Charlie’s no-longer desired childhood dream of wishing to live underwater. Nancy urges him to pursue it.  At the end of an overly long first act, two human-sized lizards, Leslie and Sarah, timidly crawl up from the sea.  Their motivation to leave the sea is much the same as Nancy’s reason to look for adventure: they no longer feel quite comfortable in their former milieu.

What follows as the two couples are initially suspicious of each other, make friends and compare the various customs and biological differences, is a humorous conversation about childbirth, child rearing, and courtship. In the end, the lizards decide to evolve and stay on land after a severe case of paranoia about new adventures.  Charlie, our male homo sapien decides to seek out new adventures.

A lot was lacking in both the play and the performance to make Seascape particularly compelling.   Practically the whole first act could have been cut, the conflict which the human couple try to resolve does not have much dramatic immediacy and the overly long conversation lagged because the two actors, Katherine Woolverton and Paul Custodio did not have the energy or comedic skills to make the text come alive.

Also, the dialogue, written at about the same time as Erica Jong’s Fear of Flying, was very much in the genre of Let’s Show Off the Literary Flair We New Yorkers Have, which made it pretentious, and decidedly unfunny. In addition,   the director J.D. Lloyd did not do much to correct Katherine Woolverton’s whiney vocal delivery as Nancy begs her husband to change.

On the other hand, the two actors who played the lizards, Josh Ryder as Leslie and Lori Lee Haener as Sarah, two very gifted comedians, were incredibly funny visually as well as vocally  Admittedly Act II was better scripted, still they were more capable of making the text come alive, as well  getting several laughs from the  audience.  And it wasn’t just the interesting costumes by Julie Evanovich.

I would say that this would have been a better production had the playwright or the director cut the first act to about 10 minutes.