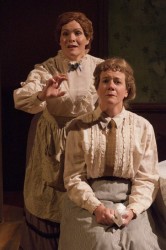 And gave her Mother forty wacks

And when the job was nicely done

She gave her Father forty-one!

Written by distinguished Canadian playwright, Sharon Pollock, Blood Relations opened this weekendat Sound Theatre Company  with a bang.  No pun intended; it was a fabulous production of an intelligent, well-crafted play about a difficult subject:  What compels a well-bred person to murder her closest relatives?

In 1892, Elizabeth Borden, of Fall River Massachusetts, the daughter of an unpopular, rich, miserly businessman, was charged with the axe murder of her father and stepmother.  An all male jury acquitted her, although there had been a strong motive- inheritance, a fair amount of forensic evidence and no-one else was ever charged with the murder.  As a result of the publicity, the gruesomeness of the crimes and Lizzie’s muddled testimony, the case became a cause célèbre.  Like the O.J. Simpson case, most people believe Lizzie did it.

Blood Relations, takes place ten years after the murders when Lizzie, rumored to be a lesbian in real life, has invited the actress, Nance O’Neill to stay at the house she shared with her sister, Emma. The Elephant-in-the-Room erupts,  when the actress asks the taboo question:  Did she do it? Through flash-back scenes, leading up to the events before the murders, the author tries to answer this question, mixing historical fact with speculation.

Lizzie had been well, but not vocationally educated, with no job skills, an overbearing violent father, who sees only one option to relieve the boredom and dissatisfaction of his 34 year old spinster daughter: marriage to an undesirable widower, who is looking for an unpaid housekeeping. Were the family poorer, she, like Jo March of Little Women, might have been able to escape into some sort of job or had she the talents of Jane Austen she may have been able to distract herself from the miseries of her home life.  Her one hobby-keeping pigeons-was destroyed by her father.   In spite of the strong feminist message, there is also a very strong universal message about how a lack of love and respect and a continual denial that one has a right to one’s feelings drives people into violence

The playwright has written an air-tight plot with no loose ends, as well as some excellent dialogue. Gianni Truzzi, the director molded his cast to deliver stunning performances from the entire cast and everything worked superbly. Designed by Richard Schaeffe, the set was a masterpiece,  pleasant to look at while visually communicating to the audience when the play took place, as well as the  social and economic status of the inhabitants.

Adding to the ambiance was a brilliant sound design by Lindsey Mork with some appropriate pre-show music hinting at Lizzie’s rebellious streak , and some creepy music at the end of the show. One thing in particular which stood out, was that the actors all got the accents right!!!!!!.  Lizzie and her sister Emma spoke like prim New England spinsters, the Irish maid and Irish Doctor spoke like Irish immigrants and everybody could be heard in the last row.

The manner in which the story was told has a slight twist, the real Lizzie plays the maid in the flash backs, and the Actress plays Lizzie, which reflects one theory suggested by psychologists about Ms. Borden.  Possibly, she suffered from a rare psychiatric disease called Fugue State, a form of disassociative amnesia, in which one assumes another’s identify for a short period of time.

Blood Relations was a brilliant production of a fascinating subject, the violence was kept to a minimum, while the psychological insights about family dynamics and the motives for murder were highly astute