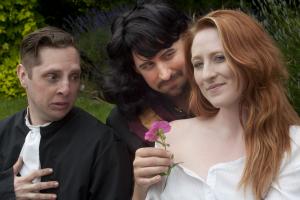 Not Shakespeare’s Most Popular Play

Love’s Labour’s Lost is not very frequently produced and with good reason.  It is mostly just one long conversation, involves references to dated political situations and literary allusions and is overly long.  Thematically, the play deals with the theme of hormonal infatuation vs. enduring love as well as the intoxicating nature of the language of love vs. realistic love.   Although a comedy, it does not end happily with numerous weddings but on a very sober note.

What little plot there is involves three friends plus the King of Navarre, deciding to devote themselves to celibacy and study for three years.  In reality Navarre was a small kingdom in the Pyrenees.   Right on cue, the Princess of Aquitaine ( a province in Southeastern France bordering the Pyrenees) and three of her ladies-in-waiting arrive and bedlam ensues.   N.B.  The King of Navarre Henry de Bourbon became one of the most revered Kings of France (Henry IV) during the wars of religion which took place during Shakespeare’s lifetime.

Unlike many of Shakespeare’s comedies, where various forms of conflict such as seduction, betrayal, intrigue etc. take place to spark the audience’s interest, Shakespeare substitutes one long endless conversation about love, a play within a play and a subplot about the indulgence of physical passion.

In the best of all possible worlds the length of Love’s Labour’s Lost is far too long, but in an outdoor summer setting anything over one hour is just plain torture.  This production lasted two hours and twenty minutes.   A major disadvantage was that the show opened in the Amphitheatre at Volunteer Park, whose landscaping is superb for outdoor theatre but has one of the ugliest stages of any Shakespeare in the Park in the universe.  It is an ultra modern angular graffiti stained red-brick structure and cries out to be dismantled.

Another disadvantage was that the director, Vince Brady, directed all the actors to over-act, and not one of the actors could endow the text with any real meaning or emotion-verbally it all seemed manufactured.  Also, the costuming was peculiarly incoherent without attention to detail or the given circumstances.  For example, a prissy Princess of Navarre who is always well-dressed would have the appropriate exquisite hunting attire-she would not be decked out for a tea-party while tromping around the forest with a bow and arrow.

I would definitely give this show a miss.