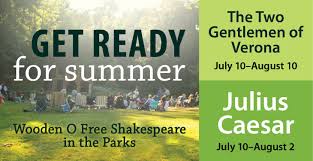 The Seattle Shakespeare Company and Director David Quicksall have fun with Two Gentlemen of Verona by William Shakespeare. This is a perfect play for a casual evening watching theater outdoors. It’s not a perfect play in that it makes sense, for it doesn’t. It’s prefect because the cast has fun performing it and sitting back and suspending not only disbelief but also thinking leads to a very delightful result.

Quicksall set this production in the 1950s. Picture Happy Days meeting William Shakespeare. This device opens up the music to all those wonderful do-wop hits of the 50s for the very capable Quintet. Songs like “Who Wrote the Book of Love” by the Monotones, “Speedoo” by the Cadillacs, and “Duke of Earl” by Gene Chandler for the musical signature for the Duke of Milan. The Quintet sings in front of a jukebox.

The Synopsis: Two friends in Verona, Valentine (Conner Neddersen) and Proteus (Jason Marr) reluctantly separate when Valentine is dispatched to serve at the court of the Duke of Milan and Proteus decides to stay because he has fallen in love with Julia (Angelica Duncan). Arriving in Milan, Valentine falls in love with the Duke’s daughter, Silvia (Carolyn Marie Monroe) but the Duke (Jim Gall) wants her to marry a rich gentleman of Milan.

When Proteus arrives in Milan and is introduced to Sylvia, he too, falls for her. Meanwhile, Julia chases after Proteus, but disguises herself as a man (Cue up: “Walk like a Man” by the Four Seasons).

Shakespeare having now brought everyone to Milan, begins to stir matters up. Valentine manages to get himself banished from the city for paying too much attention to Sylvia, Proteus unsuccessfully tries to win Sylvia and tells the disguised Julia of his heartache—which is a disappointing surprise to Julia as you may suspect.

Everyone ends up in the forest to find Valentine leading the Outlaws. There must be something about getting out of the city into the fresh air because the Duke withdraws his disapproval, Sylvia chooses Valentine, and Julia and Proteus are reconciled.

Shakespeare put in a lot of witty business and dialogue about the writing and reading—or not—of letters. Four hundred years ago just 30% of men and an unknown but probably lower percentage of women were literate, so any traffic with a letter was a big deal. In this play, the illiterate members of the audience could share the fun being poked at these literate characters and their confused handling of letters.

The production is anchored by the swagger and love of the two gentlemen friends for each other. There was no slack or lag and the two hours of uninterrupted Shakespearean language was as easy to ingest as a bowl of popcorn. When I saw the production in Volunteer Park, the sight lines were clear and the amplification made every word understandable. With Julius Caesar and Two Gentlemen of Verona the Seattle Shakespeare Company/Wooden O Productions has put together a terrific theatrical summer offering.