Fiddler on the Roof at Snoqualmie Falls Forest Theater 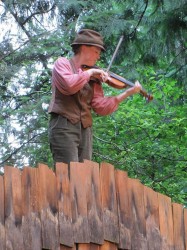 The Snoqualmie Falls Forest Theater, nestled in a canyon in a lovely wooded area about thirty-five minutes from Seattle, makes for a wonderful summer destination for theatergoers. While the show’s vibrant chorus numbers were sung effectively, the troop had some minor problems pulling off an entirely successful Fiddler on the Roof.

The afternoon began with some clever pre-show improvisations with cast members roaming the audience. They helped establish the unique setting of Anatevka, a remote turn of the century Imperial Russian village. In these scenes, constables and Jewish villagers portrayed the tensions that lay beneath the story line of the milkman Tevye and his family struggling to survive.

Tevye’s three oldest daughters played by Kyla Roberts, Angela Snyder and Bianca Raso were in fine voice throughout the show. Their vocal work on “Matchmaker, Matchmaker” was an early highlight of the production.

Bianca Raso, as the rebellious daughter Chava, provided a particularly moving performance and did some fine solo dance work in the second act.  Doug Knoop undertook the demanding role of Tevye, giving a believable, if somewhat low-key performance.  He established a natural relationship with his family, fellow villagers and  God.

The crazy dream sequence in which Tevye’s wife Golde (Aria Rose) decides to cancel the wedding arrangements for her  oldest daughter and the butcher, Lazar Wolf (John Tembreull) was one of the treats of the production. Both the cast and the audience seemed to enjoy the eerie antics of visitors from the afterlife cavorting and singing in Tevye and Golde’s bedroom.

Danny Lacker, Yossi Katzia and Jack Anderson earnestly portrayed the daughters’ young suitors. While they may have not been particularly strong singers, they were focused and energetic in their courtship scenes.

A major distraction for me was a ridiculous fake beard (maybe from Archie McPhee’s?) worn by the young man portraying the rabbi of the village. If we are to buy into the pathos and themes of the show, the old rabbi should be a man of respect, not a silly stereotype.

The Wedding Dance, that could be a high point of act one, was performed adequately but seemed rather tame. Perhaps the cast will grow into this number as their run progresses.

Fiddler is a demanding Broadway show. It features a setting and conflict that is unfamiliar to many actors and audiences. The Snoqualmie Falls Forest Theater group, directed by Buddy Todd, still has some work to do, but seem to be on the right track for pulling off this major challenge.

Fiddler on the Roof with book by Joseph Stein, music by Jerry Bock and lyrics by Sheldon Harnick will run at the Snoqualmie Falls Forest Theater through August 24; Saturdays 2 and 8p.m. and Sundays 2 p.m. For more ticket information and directions to the theater, phone: 425-736-7252 or go online to: http://store.foresttheater.org.