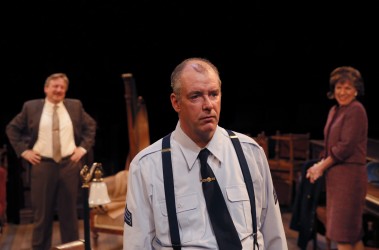 Arthur Miller’s 1968 family drama comes to the ACT Theatre mainstage with a sensational cast under the gifted directorial eye of Victor Pappas. The Price, a story about two estranged brothers deciding what to do with their deceased father’s estate, deals in Miller’s well-known favorite themes of familial obligation, rivalry both filial and fraternal, money, and despair. The production brings together Miller’s elegant exposition and rhythm, Pappas’ keen understanding of physical space, and a cast under whose composed surface organic life can be heard seething.

Lights go up on a living room full of mismatched old furniture, relics of a long-dead pre-Depression extravagance. Individually the pieces demand a kind of withered respect, yet they have collectively been strewn about the room,  covered in sheets, and clearly forgotten. A gleaming harp stands tucked almost out of sight. Robert Dahlstrom’s set is an articulate visual precedent for the narrative: the past looms oppressively and incoherently into the present.

Enter Charles Leggett as Victor Franz. Leggett’s performance is a parable of control and restraint, both as the character and as an actor. Leggett presents a character who is likeable and pitiable, yet as an actor he commands attention with each word. As the play progresses, Victor maintains a steady-as-she-goes veneer which, in flakes and shards, drops away towards the end as his understanding of himself visibly shatters. Anne Allgood, as Victor’s wife Esther, deliver’s a similarly venerable performance. Esther shows a palpable depth of love, yet, true to Miller’s intention, a calculating self-interest turns this love into rage which the audience can feel. Peter Silbert plays an ancient Russian-Jewish furniture dealer with creativity and, at times, blistering realism. I was never able to make up my mind about Peter Lohnes as Victor’s brother Walter. Is he a wooden, unengaging actor, or does he simply play a character who is never quite possible to trust? The play never really gets to the bottom of the latter case, but if it’s true that Walter is a slimeball, then Lohnes’ performance is a triumph.

Pappas’ direction maintains  a coherent balance of engagement and naturalism. The Price takes place all in the same room, with two acts that are each one long scene. It takes considerable skill and restraint to address the simultaneous difficulties of making an exposition-heavy  script visually engaging, and of confronting the reality that, in real life, people just don’t naturally move around that much. Fortunately, Pappas has a particular skill with dilemmas such as these, as seen in his production of The Importance of Being Earnest earlier this year. Rose Pederson’s costumes are lovely, and bespeak the many social and economic layers uncovered among the characters. Part of the wonder of this play lies in the stratified ambiguity, whose resolution may come with the simple realization that, with family, there are no good guys and bad guys. There is love, fury, annoyance, responsibility, neglect, betrayal, and compassion, and there are characters who get swept up in these tides.