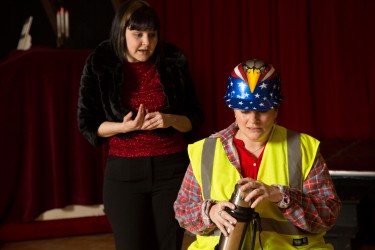 At Kenyon Hall in West Seattle, 12th Night Productions presented A…My name is Alice, a musical revue, which is both serious and funny, depicting a variety of women go through the trials and tribulations of living as a woman in late 20th century America.

Conceived by Joan Micklin Silver and Julianne Boyd, the show originally opened in New York City in 1983.  With 21 songs by composers David Zippel, Winnie Holzman, and Lucy Simon, as well as sketches and monologues, the audience is kept amused and engaged for two hours.

One of the funniest scenes involves two women, one preparing for her first date after being widowed and a 15 year old, preparing for her first ever date.  The nervousness of both is indistinguishable and the performances by Nancy Fisher as the widow and Rebecca Peterson as the teenager are heartwarming, amusing and all too familiar.

Another show stealer is when a New York construction worker has the tables turned on him, when the woman he had been taunting, sexually harasses him.  A truly sad, but funny scene is the Non-bridal Passion, when an eternal spinster, played by Amy Adair, tries to register at a Bridal registry for a shower she is giving herself, without benefit of matrimony.

The best scene is saved for the end, two girls evolve from middle school pals through all the stages of friendship, bridesmaids at each other’s weddings, overwhelmed housewives, divorces, and into old-age. They have each other and they connect everyday over the phone.  Rebecca Paterson’s performance was stunning.

Although at times, the instrumental music by Louis Magor, pianist, Jim Sternberg, reeds and David Bush, drums drowned out the singing, on the whole it was outstanding and served to punctuate the dialogue with flair.  Kenyon Hall is a delightful old-fashioned space and one of the best-kept secrets in West Seattle, and very well suited for this delightful witty production.

A…My Name is Alice illustrates that the best humor is that which says something profound about life’s sadder tragic aspects.