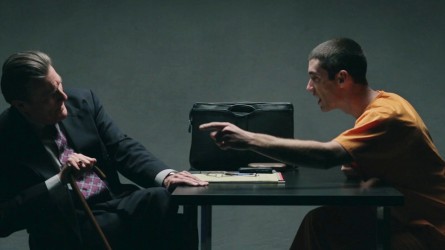 Gore Vidal meets Timothy McVeigh on the Eve of his Execution

A fund-raiser for Bridges Stage Company’s next production, the Northwest Premier of Terre Haute by Edmund Wilson, took place at the Bullitt Cabaret at ACT Theatre on Wed, March 19.  Along with some splendid munchies on purple plates, and a delightful presentation by Artistic Director Aaron Levin, about the genesis of the company, the audience of friends (and one critic) was treated to a reading of two scenes of the play  by actors Norman Newkirk and Robert Bergin.

The Federal prison, where Oklahoma City Bomber Timothy McVeigh was executed in 2001, is located in Terre Haute, Indiana.  Terre Haute, the play, is a fictionalized account of the friendship between a famous domestic terrorist named “Harrison” and a distinguished ex-patriot American writer named “James.”  The play was inspired by the correspondence between McVeigh and Gore Vidal, which took place after McVeigh read War at Home, a 1998 article by Vidal about the erosion of civil liberties in the U.S.,  published in Vanity Fair.

In real life, the two actually never met, but the play takes place in the visiting room of the Terre Haute Federal Pen over the five days before McVeigh was executed.  A joint production of ACT Theatre’s Central Heating Lab and Bridges Stage Company will be presenting Terre Haute in the Eulalie Theatre, opening on May 16 and running through June 11.

Of his decision to portray a Timothy McVeigh type character as a deeply flawed human being rather than as a subhuman, Director, Aaron Levin expects to spark a lot of controversy and anger but believes that

“We have to stop looking at such people as monsters, rather than the human beings they are. This view point which is promulgated by the media allows us to dismiss them as insane. Now I’m not foolish enough to think that by understanding their motives we can stop all terrorists’ attacks, but if we don’t try to figure what went into to creating them and pushing them in this direction then we truly have no hope of reducing such attacks.”

Although the subject sounds quite disturbing,  judging by the two scenes I saw, there is enough comic relief and Vidalesque wit to make this serious play both enlightening and entertaining.