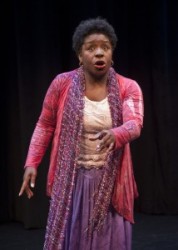 Often humor is more effective for discussing serious topics in life than serious drama  There could be no better example of this than the new Taproot show, Pretty Fire, which opened recently.  A one-woman show by written by actress Charlayne Woodward, starring Seattle’s Tracy Michelle Hughes, this excellent production delivered life-affirming humor, while depicting the formative experiences of a Northern African- American girl with Southern roots.  However, in many ways, she could have been Emily in Our Town, since the author and the actress spoke of universal experiences.

Actress Tracy Michelle Hughes was absolutely outstanding, and had more than everything necessary for a solo performance:  superb comic timing, the ability to change characters rapidly using only her voice and physicality, and a warm connection with the audience.   Just listening to her velvety voice is worth the price of a ticket.

Particularly hilarious was the opening scene when she describes her very premature birth.  For those of us who did not grow up in an extended families common to African Americans (and other hyphenated Americans) the warmth and potency of the African American family structure, as depicted in this play, was  endearing.

Without whitewashing the Jim Crow experiences of the South, and the understated racism of the North, the show is highly entertaining and touches the heart.   Just what Seattleites need at this time of year as we wait and wait and wait for spring and sunshine.