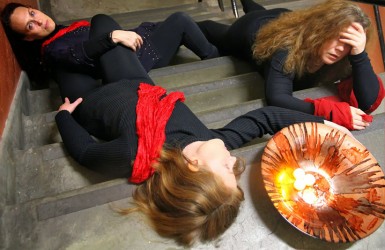 MythFest is a series of three one-acts that each examine a well-known classical myth. Three women (Machelle Allman, Carolynne Wilcox, and Jen Smith Anderson) gather to pray to the goddesses and gods of old for, respectively, vengeance, wisdom, and beauty. Their prayers are answered in turn when their bodies are taken over by the spirits of the characters Hyppolyta, Cassandra, and Helen. As each one-act unfolds, the audience hears the often-missed side of the classic tales: the side of the women.

As this show begins, I confess that preconceptions about what it will be may begin to turn in your head. The informal setting of the Seattle Creative Arts Center, the beyond-minimal set, and just these three actors simply sitting or standing on the stage. All these factors may bring to mind the kind of theater whose sole purpose is to indulge unambitious creatives in a theatrical flight of fancy.

But as this triptych of one-acts unfolds, you are first impressed by the exquisiteness of the script. I was unfortunate enough only to have caught the tail-end of Machelle Allman’s piece, Hyppolyta, but what I did see of it comprised of verse of a skill and delicateness that one does not often find in modern theater.

In the second piece, written by Persephone Vandegrift, Helen—whose beauty is said to have caused the Trojan War—speaks of her own experiences during the savage conflict. As this stunning monologue develops, you begin to realize, “What I am watching is incredibly important.” I won’t give away the themes, here, as I don’t wish to do them injustice. But Helen tells us many devastating things about beauty and the burdens placed on women by the cultures who have revered and often punished them for their beauty.

In the third piece, of Carolynne Wilcox’s creation, Cassandra—cursed to know the future and never to be believed—and Clytemnestra explore alternatives to the latter’s murdering of the former. It is here when you realize that the characters you’ve been watching are no different from the ones you see every day. The play comes home.

If you like wonderful scripts, playful performance, and the idea of investigating greater openness in the portrayals of female characters, this play is for you. Give it a chance. This is really important theater.

MythFest, directed by Rebecca Goldberg, opened on Friday March 7, and will play twice more on Fridays the 14th and 21st of March, at the Seattle Creative Arts Center (2601 NW Market St in the Ballard neighborhood of Seattle, WA). Tickets are $14 at the door, or $10 online at www.thepocket.org