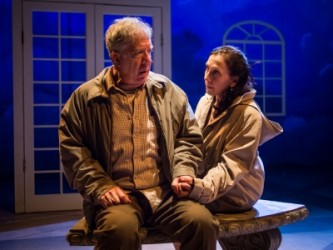 Marty Mukhalian makes her ArtsWest debut as Laurie Jameson, the star professor at a prestigious, but unnamed liberal arts college.  In her opening English Literature class lecture she announces,  “Rest assured, this classroom is a hegemonic-free zone.”  She then proceeds to deliver a lecture on King Lear, insisting that Lear’s monstrous two daughters, Goneril and Regan, are the true heroes of the play while Cordelia is just a “girly wimp.”   The women’s studies star is poked fun of a bit here, with Wasserstein perhaps suggesting that literature may not be able to be broken down quite so simply, even by a well-educated, liberated 54-year-old scholar.

The play’s conflict arises in the form of Woodson Bull III, or just Third.  Mark Tyler Miller, who has recently done such fine work at The Taproot, successfully portrays the charm and self-assuredness of this bright student athlete.  He seems to stand for everything Jameson distrusts, as he succinctly lays out his goals to her: Learn, wrestle and graduate.  Jameson loathes his “amoral intelligence.” She glibly equates Third with everything wrong in America, most notably white male entitlement, George Bush III and his invasion of Iraq.  The real battle is triggered when Jameson accuses Bull of plagiarizing his Lear analysis because it is simply too well written. The major conflict seems a little too contrived. That Jameson could be allowed to bring Third in front of the administration with such little proof is  hard to fathom.  Wasserstein’s script does, however,  generate some breath taking individual scenes.

Most touching here is Kate Witt’s portrayal of Nancy Gordon, Jameson’s good friend who is battling cancer.   Knowing the insurmountable health issues Wasserstein was facing while finishing the play, adds an extra dimension to this character and what she experiences in the plot line.

Bill Higham is Jameson’s father, contending with progressive senility.  He has some fine moments as his character clings to a world that won’t stay put.  Wasserstein has  superimposed some of the dynamics of King Lear throughout her play.  The father’s final scene finds him raging outside during a rainstorm.  While the two works successfully reflect  each other, I would have liked to have seen the comparison/contrast fleshed out further during the course of the show.

Kacey Shiflet takes on the role of Jameson’s daughter, who appears in the play on holiday visits on break from Swarthmore.  Her disillusionment with her life and family is just another prod for Jameson to slow up a bit in her role as a brave new woman, and consider when she may have short changed a good deal of what she has been given in her life.