Me vs My Subconscious 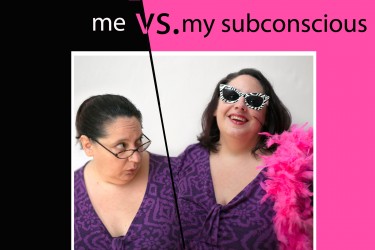 My Life is One Long Freudian Slip

Me vs my Subconscious, an original solo show written and performed by Rebecca Goldberg, demonstrated that the best humor is that which says something profound about  serious existential questions.  Like Woody Allen,  Me vs. My Subconscious was all about one person’s insecurities in life.

Cleverly,  the main character, whose name we never learn,  vocalizes various battles with her self-conscious, which keeps sabotaging her unsatisfactory life, until she starts listening to her subconscious, allowing it to direct her decisions and through doing so,  takes the risks necessary to change her life, freely choose a direction for herself and live more creatively.

The script was excellently written by the actor Rebecca Goldberg, who has the talent to go very far in show biz.  Directed by Kris Flink, who kept the one hour plus monologue moving swiftly and kept the audience’s interest, as the actor recounted “accidently” getting fired from her job as an accounting co-ordinator the day she was going to be promoted to “supervisor”,   sabotaging her next interview for a similar job, then struggling about whether to go to Paris or not.  In Paris she lets go, discovers her passions: pastry and singing, and upon coming back to Seattle, follows her dreams.

This show is hilarious, the technical aspects high-lighted the emotional moments and it is well-worth seeing, especially because Rebecca Goldberg may be the next Woody Allen and move to LA or New York.

ME VS MY SUBCONSCIOUS,  Written and performed by Rebecca Goldberg.  Blank Stage Theater Presents.  Theatre Puget Sound’s Theater 4.  ( located on the 4th Floor of the Armory at Seattle Center)   Through Dec. 15. 8 pm. http://www.brownpapertickets.com/event/488286

Holiday of Errors -or- Much Ado About Stockings
December 8, 2013