38th Anniversary of “A Christmas Carol” adaptation by Gregory A. Falls 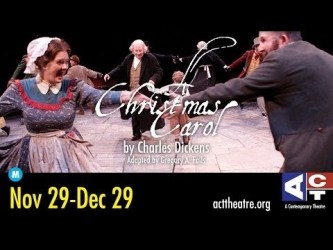 Not surprisingly, an ACT mid-season showing of its 38th annual Dickens Christmas Carol, still filled the house.  The traditional favorite gets at the root of Christmas spirit by reconciling two opposing forces – Scrooge and Tiny Tim – without diminishing the importance of familial solidarity during times of struggle, the generosity of strangers, and the deep wounds that survive decades which somehow never go unnoticed come Christmastime.

The show was performed with tangible warmth by a cast uplifted by its youth players. Anna Imehana Lilinoe Ostrem played Tiny Tim for a second time adding a layer of sweetness to the character’s already pure archetype. Noelle Whitman performed Martha Cratchit with maturity and grace while Nate Kelderman, playing the youngest Scrooge, served as a the reminder of the inner child whose spirit is reignited during Christmas.

Peter Crook did a classic Scrooge edged with moments of humor and vulnerability making him more relatable than in other depictions. Other notable players included G. Valmont Thomas who played the Ghost of Christmas Present. His Dionysian and altogether jovial presence brought plenty of laughs from young and old.

The song and dance aspect of the show was spirited, committed and well done. All around this is great traditional play for everyone start to finish. With all the elements of spookiness, laughter, music, inner conflict reconciliation, and love, it’s hard to go wrong. Enjoy!