Flame in the Mirror 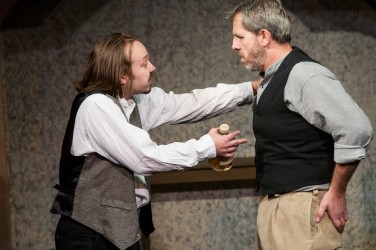 Five Star Production in the Hood

Perhaps the best show I have reviewed this whole season, Flame in the Mirror, opened this weekend, at Eclectic Theater in the Pike/Pine corridor, written by a Capitol Hill homeboy, playwright, John Ruoff.

Flame in The Mirror, deals with the various intense love permutations of those born with  “Y” chromosomes.  There was a father-son generational conflict between Charlie Terry, a super successful Irish immigrant to the U.S. who “owned” a mining-town in Montana and his son.    Charlie, like most Irish 19th Century immigrants, was motivated by the fear of starvation, while his more pampered and better educated son was motivated by higher values and spirituality, but who had never faced poverty and destitution.

In addition, there is a conflict between Charlie’s more honest brother, Elmer, a junior partner in the mine,  concerned about safety.   Although it was under-developed and in the background, there was a potential strike in the small-mining town, as well as the disintegration of a traditional and passionless marriage.  All of this was played out underneath a canopy of Catholic values and imagery.

Everything about the production was outstanding.   As soon as the audience walks in, the set by Meg Tierney, conveys the idea of “lace-curtain Irish” that is to say: arriviste respectability.  A musical score by Bob Blumenthal was spot-on at pin-pointing the ethnic background, with simple effective costumes suggesting the 1900 era.  The exposition was handled swiftly, and the various conflicts and plot points were brought into the first scene immediately, so the audience’s attention and anticipation was focused with lightning speed.

Although there was not a weak actor in the cast, the performances of Larry Albert as Charlie Terry the mining tycoon, Nick Mathews as Teffy Terry-the son, and Anna Richardson as Katie Terry-the aunt, who becomes widowed, were superb.  Unlike many actors playing Irishmen who resort to whiskey to deal with grief, Larry Albert, as Charlie Terry, kept the anger to the bare minimum, and had some endearing monologues when he recounted how joyful the love of his brother and son had made him.

The intense love-hate tango between the son and father was orchestrated brilliantly by the director, Greg LoProto, who had the insight and subtlety to bring out the full range of human emotions in the text, demonstrating that this play was directed by an expert.

The other expert in the constellation was the writer, John Ruoff, an American of Irish descent who has spent a lot of time in the old sod.   With the ability to capture authentic Irish dialect, the dialogue soared and the Catholic concepts and jokes sprinkled here and there in the text were not only funny but added another dimension to the conflict.  Charlie Terry is a capitalist of the Dickensian type, which is not a Catholic value, especially at a time when most of the Catholics ( being Irish)  in the U.S were the lowest paid, most disenfranchised among the white working-class.   The dialogue of the son, Teffy was enchantingly poetic with an awesome delivery by Nick Mathews.

Although I would say that the plot is a just a tad unfocussed, this is certainly the most enjoyable play I have reviewed in a long time, and it was a relief to see a play about people with drinking and emotional problems which got beyond the surface issues and expressed grief, love, sadness and real human emotions rather than just anger and violence.

It would be wise to see this play now, before it goes to Broadway, the Abbey Theatre, or the West End.  Incidentally,  Eclectic Theater has been remolded and there is a nice “cocktail lounge” to have a drink and snacks before the show.

FLAME IN THE MIRROR by John Ruoff.  Eclectic Theater .  1210-10th Ave, 98122.  First Hill-Pike/Pine Corridor between E. Union and E. Seneca, (across Madison from Seattle U. ) Thu-Sat at 8pm and Sun at 2pm thru November 3. (NB No performance Sat. Oct. 19) eclectictheatercompany.org/‎ www.brownpapertickets.org