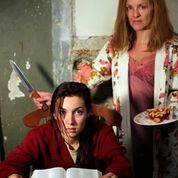 Co-presented by Balagan Theater and Seattle Theater Group and directed by Louis Hobson, CARRIE the Musical is not the starkly eroticized thriller of its literary and cinematic namesakes, but it is tons of fun. With ensemble numbers like “The World According to Chris,” about how important it is in adolescence to hurt others before they hurt you, CARRIE makes impeccable use of teenage-angst to tell a lively—if a little hokey—story of tragic almost-happiness. It successfully delivers a compelling story, even with a conspicuous lack of special effects—if you want expensive magic and objects flying around the stage, go see Peter Pan.

While the tone and exposition of this show are very different from what one expects from Carrie’s story, this production resembles the 1976 cult film in an important way: it is endearingly—even beautifully–rough-around-the-edges. The young cast appears not entirely comfortable in their bodies, which, when playing teenagers, only contributes to realism. The book (by Lawrence D. Cohen) can be painful at times. With cliché lines such as, “I’m not mad, I’m just disappointed,” it feels like a mashed in afterthought. Written in the eighties, it contains all the clunky ‘teenager language’ (modified for a millennial audience) that one can expect from a high school story—young people say “epic” right? And isn’t it funny that one of the jocks might be gay?!–but honestly, when shy wallflower Carrie finds the confidence to drop the F-Bomb, it’s truly moving.

Michael Gore’s music and Dean Pitchford’s lyrics are both thrilling and memorable, as is the vocal talent in the cast (Alice Ripley and Keaton Whittaker are heart-stopping together). This is a show in which one simply does not want the musical numbers to end. CARRIE is also directed beautifully and expertly by Balagan Theater’s own Louis Hobson. The show makes subtle and elegant use of a stark, not-quite-minimal-enough-to-be-minimalist set. The space is used in a visually pleasing, sensible way, such that you just don’t notice that the backdrop never changes from a brutalist building facade. Transitions between scenes are smooth, as are the transitions into musical numbers.

Lighting is important to the specific ambience of CARRIE’s narrative. Tom Sturge put serious thought into when characters must be downlit, or fully lit, or drowned in blood-red light. Admittedly, there are tech issues that want resolving. The show is littered with lines whose first-halves are obscured by turned-off microphones, and the audience watched at one point with deep sympathy as several characters mounted a fallen Prom banner, mid-scene, as actors scrambled to improvise a natural acknowledgement of this. These were minor distractions, however; opening night makes fools of us all, sometimes.

This show is not for everyone, and may not be for the most discerning of audiences; however, you’d be a fool to deny that this star-laden cast is impeccable. The vocal talent is a mesmerizing set of rock-opera power-belters. And besides this, those who love the film will know that Carrie’s is a story about painfully complex relationships, and these relationships were, if anything, deepened in Carrie the Musical. Ripley, always a disconcerting powerhouse, was built for the role of Margaret White. Her performance, alongside that of the shocking and talented Whittaker, viscerally conveys their eerie familial bond, and it makes the audience squirm. Kendra Kassebaum, who plays the compassionate and slightly sad PE teacher, is brilliant in her ballad—and in everything else.

CARRIE the Musical is a lot of fun. The vocal talent and music alone make it a worthwhile evening out, and the characters are likeable, the story is devastating, and the drama is palpable. It is not polished, nor is it the bleak horror story of its cinematic counterpart, but it stands on its own as a delightfully sad story of insecurity, sexuality, and the universally oppressive need to be loved.

CARRIE the Musical opened at the Moore Theater (1932 2nd Ave, Seattle) on October 11 and runs till October 26, Thursdays-Saturdays at 8pm, Sundays at 7pm, with 2pm matinee performances on Saturdays 10/20 & 10/26. Follow the links for tickets at