The Matchmaker Wraps Up the Taproots’ 2013 Season 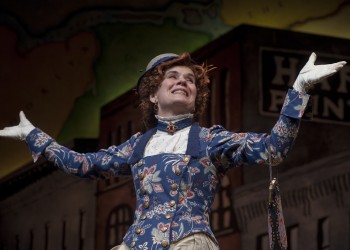 A pretty goofy play with an even goofier history takes the stage at Greenwood’s Taproot Theatre.  Thornton Wilder lifted The Matchmaker’s story line from Austrian playwright, Johann Nestroy’s, 1842 three act: A Day Well Spent. Wilder took his version to Broadway in 1938 and called it The Merchant of Yonkers.  It flopped.  But fifteen years later he revived the show and transformed the minor character of Dolly Levi into a lead and titled it The Matchmaker.  It worked, and the play eventually inspired David Merrick’s Hello Dolly!  We’re left watching a pretty familiar story line in a bit of a different milieu.   The play offers some great sight gags, slapstick humor, lots of restrained late Victorian flirting and just enough touching moments to keep the works from gumming up too badly on an overdose of sugar.

Robert Gallaher takes on the role of Horace Vandergelder and seems to be channeling Gale Gordon, the curmudgeon that gave Lucille Ball and Eve Arden such a bad time on black and white television.  He terrorizes his employees, his niece and her suitor and even gives his barber a tough time.  Only the serene Dolly Levi, his appointed matchmaker, seems to be able to see through his sour disposition to appreciate that he may be just the man to replace her dear departed husband.  Pam Nolte assumes the role of Dolly and has a wonderful quiet moment in an Act II monologue that is a refreshing break from a lot of the preceding silliness.

Robert Hinds is Cornelius Hackl, the lowly clerk working for Vandergelder; he’s itching to break out of his binding job and escape Yonkers to experience the wild energy of early 1880’s New York City for just one night.  He and his buddy make a run for it and meet the lovely widow Mrs. Molloy, who happens to be the target of his boss’s courting.  Lots of surprises and complications follow and Hinds maintains a charming twinkle in his eye throughout.

Director Scott Nolte keeps the pace and characters moving nicely through the evening, but should have a tighter reign on some of the actors’ mugging.  We’re in small confines here where less is definitely more.  Mark Lund is responsible for both the scenic and sound design and created a wonderfully  effective set in which a map of Manhattan and its environs hovers over the actors on the boards below.

As in his earlier success Our Town, Wilder is determined to break the fourth wall and has his characters stop to speak to us directly on a number of occasions.  They  want to share their dreams and exploits and seem to enjoy that we’re all along for the romantic, crazy ride.