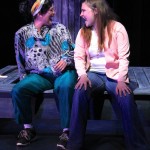 As I was sitting watching She’s Come Undone by Wally Lamb, I correctly guessed that it was an Oprah Book Club Selection.  (1996)  It tells the story of a Dolores, a woman from age 6 to age 40, who was born into a quintessentially dysfunctional family: emotionally repressed mother, father and grandmother, in the 50’s when knowledge of psychology and mental illness was more primitive than it is today.  Predictably, in her childhood and teenage years, she has to deal with domestic violence, her parents divorce, her mother and grandmother shielding her rapist from the consequences of his actions and her own suicide attempt.  However, the novel and the play are optimistic because she does get help and manages to piece together a fairly decent life.

Superbly directed by Kelly Kitchens, there was not a weak actor in the cast, and the performance of Jocelyn Maher as Dolores, was an A plus performance in an incredibly demanding role.  Maher managed to physically and emotionally convey a six year old, a teenager, a 20’s something and a woman on the edge of middle-age.  In addition to being in virtually every scene in a very long play!!!!!

Since the novel is extremely episodic and moves around to many indoor and outdoor locations, the director wisely chose a simple abstract set, by Andrea Bryn Bush,  made up of various platforms;  all this supported the quick set changes and served the production well, as it allowed the audience to focus solely on the brilliant acting.

The weakness of the production was in the structure of the adaptation.  The first act was entirely exposition and lasted 75 minutes.  In those 75 minutes, the factors which lead to self-destructive choices in life, were dramatized ad infinitum.  It took about ten minutes for me to figure out that this girl was headed for predictable trouble; however, the show kept having scene after scene making the same point.   Perhaps for those who have never read about family of origin dysfunction and how it leads to sexual abuse, domestic violence, poor choices and addiction, it could have been interesting.

It was psychologically 100% accurate and had it appeared pre-Oprah, it might have seemed less dated, but in this post-Oprah age mainstream knowledge of the effects of growing up around emotional repression is too sophisticated for it to have said anything ground-breakingly new.  Seventy-five minutes was just too long for a first act, especially since it had virtually no comic relief.

Dramatically speaking, this novel lacked a very focused plot to drive the action; in many ways the story should have been the back-story for some action on the heroine’s part.  One loose end, which was never tied up in the production nor, I suspect,  in the novel, was whether the heroine ever tried to get her rapist convicted.  Although, I am not an expert on recovery, it would seem to me that a therapist might have suggested that her recovery depended on taking action to confront the rapist.

The second-act however, was much more upbeat without being a fairy tale, Dolores begins to recover, has some false steps and eventually finds enough love and contentment to feel happy.  Like a blessing from heaven, there was plenty of comic relief for the audience.

All in all, this was an extremely challenging novel to stage, and it contained difficult subject matter.  As I think about it,  I am still amazed at what a good job the director, Kelly Kitchens, did with the material, how superb the actors were and how well-served the production was by the set.  But it is not for the faint of heart, there are some pretty graphic scenes of “unpleasantness”