Soft Click of a Switch by Carter W. Lewis 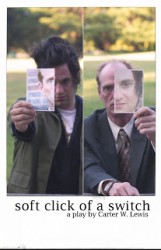 How to Build Bombs and Influence People

Is actually the subtitle of the play Soft Click of a Switch; however, that title  is somewhat misleading.  Although building and detonating bombs does come into it, the play is actually about how alienated ineffectual males turn to violent destruction to regain a sense of purpose, albeit skewered, and feel that they have a place in the world.  Along the way, the audience is entertained by some very dark humor which gets to the core of the human condition.

Two strangers, who judging by outward appearances-age, occupation, dress and marital status-seem unlikely to ever become friends, are drawn together by their mutual alienation and engage in some funny, tragic, absurd, focused, rambling, profound, trivial and revealing conversations, which were delivered with amazing wit and superb comic timing.   Played brilliantly by Brandon Ryan, Ed is a young 20 something, seemingly unemployed, who when not drinking and philosophizing about life and art, spends most of his time standing on a chair in his apartment looking through a peep-hole not only observing a couple in the next apartment, but deeply involved in his fantasy about their lives.  Played by Mark Fullerton, Earl, who looks like a straight-laced corporate man,   has an even darker side and seems more alcoholic.

Although the plot rambled,  the tour de force acting, writing and directing ( by Peggy Gannon) mostly kept my attention.  Ninety minutes is rather too long for a two person play and in the middle the energy of the actors lagged; however, while when they were on, they were ON and the evening was full of surprises, delight and powerful insights into life and terrorism.   Very few actors or directors would have been able to bring this difficult play to life,  it is well worth seeing.

NB.  Something else well worth seeing  is the artwork displayed at West of Lenin, in the Lobby.  I’m not qualified to review visual art, but it makes the pre-show wait very pleasant.