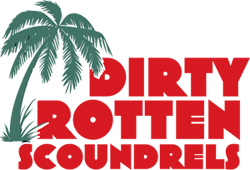 Great Play, No Need to Make it into a Musical

Dirty Rotten Scoundrels, the musical, which opened at Seattle Musical Theatre on Friday is the re-make of the 1988 movie, of the same name, which was a remake of an even better 1964 movie, Bedtime Story, with David Niven and Marlon Brando.  Turning these excellent movies into musicals contradicts one of the fundamental tricks all good directors know:  if you’ve got a weak script without much of a plot and a lot of schmaltz, you can salvage it by turning it into a musical. Actually, these movies had great plots, funny situations, and interesting characters.   Character development was even present in the 1964 movie.  In my opinion, it was not necessary or even advisable to turn these scripts into musicals.

Taking place on the French Riviera in the fictional resort of Beaumont-sur-Mer, Dirty Rotten Scoundrels tells the tale of two con-men, who prey on naïve wealthy American women.    Each employ different tactics; Lawrence, who appears to be a cultivated charming Englishman, pretends to be a deposed Prince of an unnamed European country, romantically trying to finance a resistance movement.  Freddy, plays a vulgar American hick, sentimentally trying to finance an operation for his grandmother, a bookie in St. Louis.  In the end, they are forced to team up together, when Lawrence is outmaneuvered by Jolene, an Oklahoma cowgirl/oil heiress and an engagement is forced upon him.

Jolene, played by Hayley Ewerz, a  beautiful, talented comedienne as well as a superb dancer,  was the high point of the evening.  All the other dance numbers were pretty bland, but not the one where Jolene came out in frizzy hair, a big smile, huge blue eyes, cowboy boots and a cowboy hat while dancing a number right out of a Texas hoe-down.  Her accent was absolutely perfect, and even in the ensemble numbers her presence commanded attention.

Technically this production suffered because of the problems inherent in making a movie into a stage play.  There were too many short scenes which could not easily be accommodated onto the set and the numerous set changes were awkward and slowed everything down, as did the musical numbers.   Uninspired, was the word that comes to mind, when I think of the music.  Taking place in one of the most opulent places in the world, the set looked very cheap and thrown together, and the backstage lights and stagehands were sometimes visible to the audience.  Since the tickets aren’t cheap one would expect better production values.

On the other hand, the plot was intricate and sufficient to hold the audience’s attention without the music, the dialogue was witty, funny and topical.  Mark Waldstein as Lawrence and David Roby as Freddy were a funny team and got their accents right.  David Roby was an excellent dancer and the physicality he brought to his performance was outstanding.

The show was also overly long and the situation wasn’t helped by starting 15 minutes late followed by a rambling unnecessary 10 minute spiel by the interim Executive Director.  As a result, the audience did not actually get out of the theatre until close to 11.