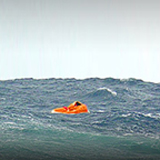 Coupla white dudes sitting around in a lifeboat.

The Raft, by Ben Eisner, opened at Theatre 4 in the Center House of Seattle Center on Friday night.  As its name suggests, the play takes place on a raft-actually a life-boat, after a ship-wreck,  where two best friends from high school try their best to survive, come to terms with death and the repressed sexual undertow of their relationship.  The actual means for trying to survive is to finally solidify a movie script they have been talking about making for years.  In between rationing food and water as well as fending off sharks, they improvise scenes from the script and enact the dance of ambiguous sexual attraction.  The movie script scenes were the best in the play and Ryan Sanders as Duck, delivered the best performance as the openly gay man, trying to seduce a “family” man, Davey played by Mike Mathieu, whose tendencies were less open.

However, the actor/authors, Ryan Sanders and Mike Mathieu, who also directed themselves, chose the wrong medium for this “play”.  On a raft, there can be very little movement, otherwise the raft will tip over into the sea, and there is very little action in being marooned at sea.  Furthermore, the raft hid the actors from the audience much of the time.    The play was all in the dialogue so it could easily have been a radio play.  Had it been written as a movie, the camera could have created movement, shown exactly what was happening inside the boat, and shown the sharks lurking around looking for lunch.  The exposition was overly long and my interest was not engaged until the subtext of their relationship, came into focus.  Directing oneself on stage is perilous and at times their diction was mumbled and indistinct.

It would be a good thing for these two to take the advice of their characters and actually make a movie or a radio play out of this material, it was a clever device to explore relationships and the role of creativity as a survival mechanism.