The Trial by Franz Kafka 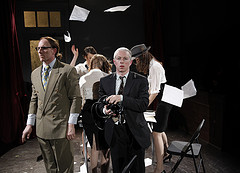 Life imitated art, because  the theater’s address was not in the GPS; and it was located in the former INS immigration jail.   As I had visited it almost daily, when a friend of mine was incarcerated for an interminable nine weeks, I was inundated with memories of unsuccessful legal action.

In Seattle, the INS building is where foreign deportees were kept, usually for a few days while the deportation “trial” takes place.   The only way to get out is on a deportation order, so the location was the perfect metaphor for the stage adaptation of Franz Kafka’s novel The Trial by New Century Theatre.

Opening with the insignificant Joseph K, (played brilliantly by Darragh Kennan)   being bizarrely arrested on no particular charge,   Joseph K tries various means to identify the specific charge in order to prove his innocent.  But he never does.

The Trial is a difficult novel to stage because the structure does not have a dramatic arc, nor is there any character development; however, the play was riveting due to the inventive script (adapted by Kenneth Albers), the expert direction (by John Langs) and tour de force acting by an outstanding cast.  All the actors handled the timing with perfection, at times very pregnant eerie pauses, at other times lightening delivery of lines which expressed the absurdist theme of the break-down of communication.  Very seldom does a play have such a uniformly excellent cast.

Midway through the play, the thought entered my mind that this script could have been adopted into a Book-It style delivery, where the actors speak the lines of the omniscient narrator.  A few minutes later that is exactly what happened, with exquisite choreography underscoring the text.  Those two scenes were to die for.

Kimberly Newton’s costumes, especially of the female office workers and Joseph K’s aunt, mostly in black and red, added a visual element of menace.  Even more menacing were the sound effects by Robertson Witmer.

Although he published little during his lifetime, Franz Kafka is one of the most influential writers of the 20th century and one of the greatest masters of prose in the German Language.  Born in 1883, into a German-speaking Jewish family in Prague, ruled by Austria until 1918, The Trial draws on his unhappy experience as a lawyer, working in a semi-governmental insurance office handling endless litigation for workers compensation.

He followed the popular 19th Century literary tradition of dying of tuberculosis in 1924, at the age of 41, having seen the beginnings of psychology, the break-up of the Austrian Empire, revolution in Germany proper and a Jewish pogrom in Prague in 1919.  Unlike many of his relatives, he missed the Holocaust and World War II, but The Trial strangely foreshadows the horrific absence of justice, and random punishment by the Nazis.

Since he famously had a difficult relationship with his overbearing businessman father, in The Trial and other works, authority is not portrayed positively.  His themes were existentialism which influenced Sartre and Camus, alienation-whose origin was probably in his neurotic, depressed, fin-de-siècle personality, the psychological brutality of bureaucracy and absurdity, which influenced Ionesco.   Although Kafka did not identify himself as a Jewish Intellectual, the perennial Jewish theme of “guiltless guilt” and persecution drives the action in The Trial.

New Century Theatre is to be commended for taking on such a difficult novel; they successfully accomplished the near impossible.  The evening was an experience not to be missed.