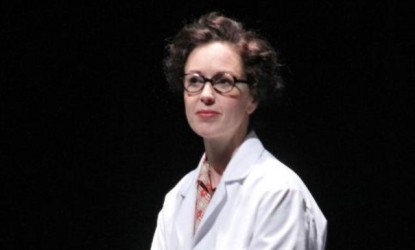 Photograph 51 is a compelling and historically-inspired play about the race to identify the composition of DNA.  Set in London in the 1950s, the story focuses on the life and work of Dr. Rosalind Franklin, one of few women in science at the time.

Don’t get me wrong, Franklin’s story needs to be told.  I’m just not sure about how this script does it.

Rosalind Franklin was a scientific pioneer who took the X-Ray photograph that led to the discovery of the double helix.  However, Photograph 51 is really more about the men in her life than Franklin herself.  Five male characters narrate the tale of her role in the DNA discovery, framing the events from their own point of view.  They talk to the audience directly, move about the space freely, and when they are not speaking they do not leave the stage—they just sit casually in armchairs to watch Franklin work.

The object of their gaze is the powerful and award-winning actress Kristen Potter.  Her performance as Franklin is smart, subtle and strong with just a touch of book-wormish quirkiness that is very endearing.  Each actor, in fact, performs very well.  Bradford Farwell as her slightly addlepated colleague Maurice Wilkins disappears into his role, making us feel sympathy for him even when we may not want to.  Brian Earp is warm and friendly as Ray Gosling, Franklin’s student and lab assistant; Aaron Blakely is in earnest as Don Caspar, Franklin’s fan and colleague; and Benjamin Harris and MJ Sieber are darkly comical as Watson and Crick, the two who took most of the DNA discovery credit.

These characters from the 1950s, particularly Watson and Crick, say many of the same things about Franklin as we’d hear today about Hillary Clinton, even though it’s 2013 (Have we not evolved at all?!).  They critique her clothes, her hair, her body.  The word “hag” is also tossed around a bit.

But hell, I suppose that giving men the first—and last—word  is an appropriate way to frame this tale.  A number of historians will point out (sorry, fellas) that a bunch of privileged, Caucasian males have traditionally called the shots.  They are the protagonists of history.

And, as Photograph 51 shows us, that’s the problem.

*While you’re there, be sure to check the lobby display dedicated to women and science.