Jeeves in Bloom at the Taproot 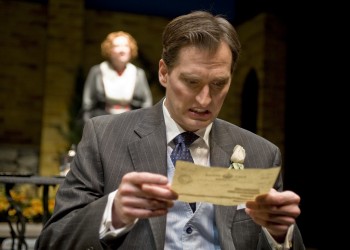 Jeeves in Bloom at the Taproot Theater

This theatrical package is as bright and joyful as an English country garden in May.  For Jeeves in Bloom, playwright Margaret Raether combines a number of Wodehouse stories that illustrate the awesome social skills of the butler Jeeves as he adroitly presides over the chaotic world of his master, Bertie Wooster and Bertie’s wacky family and friends.

Matt Shimkus as Jeeves and Aaron Lamb as Bertie are remarkably comfortable in the lead roles of this regional premiere.  Lamb captures the perfect balance between delightfully charming and woefully empty-headed. The rest of the cast all seem to be having lots of fun and the night slips by like a pleasant out-door tea party.

There is not much more at stake here than a late payment to Bertie’s aunt’s printer or his old school chum, Augustus Fink-Nottle’s 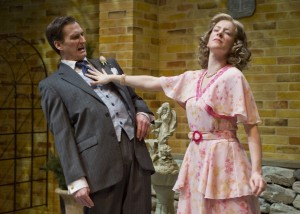 crush on the lovely debutante Madeline Basset, but this hardly matters.  Wodehouse knew how to entertain his audiences, living under the shadow of World War I.  And his silliness still works a good deal of magic in twenty-first century Greenwood.

Stephen Grenley as Uncle Stephen has a show stopping moment as he digests a special medicinal concoction whipped up by Jeeves that is sure to restore his spirits.  Randy Scholz as Augustus seems properly flummoxed as a smitten lover, far more comfortable studying newts in his college labs than approaching the rather approachable Madeline.

Jeeves in Bloom is directed by Karen Lund; lighting-Roberta Russell; dialect coach-(the British accents sounded spot on to this ear) Christine Marie Brown.  Runs through March 2.  Tickets at 206-781-9707 or e-mail at taproottheatre.org.