Inspecting Carol at the Rep–Tis the Silly Season 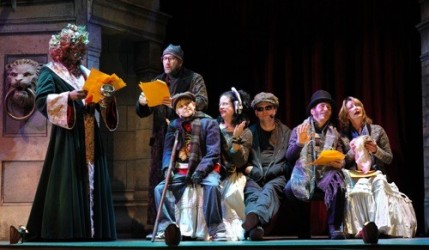 In the program notes Seattle Rep Artistic Director Jerry Manning reminds his audience that “comedy is hard.”  I am not sure it need be as hard as the theater’s revival of Inspecting Carol makes it out to be.  In their 50th Anniversary Season, the Rep has restaged Daniel Sullivan’s 1991 portrayal of a down and out theater group, The Soap Box Theater, staging their annual production of The Christmas Carol.  It’s The Rep’s first go at it since 2001 and the show feels a bit rusty.

Act I is spotty as the group takes forever to get an early rehearsal going. Petulant actors, malfunctioning stage ware and an unexpected guest, wrongly assumed to be a representative from The National Endowment of the Arts, provide mildly funny obstacles for the fictional theater company.  But the pace seems a little too slow and some of the bits don’t seem to really click.  Burton Curtis enlivens the proceedings, frantically pacing the stage as the put upon business manager, and Kimberly King and Michael Winters do provide a warm touch as the old pros of the company who have seen it all.  I enjoyed King’s character putting the cast through a wacky actors’ warm-up routine.

The pace and hilarity pick up a great deal in the latter part of Act II as the doomed play within a play finally gets on its feet.  Ian Bell’s take on Scrooge is really fun to watch, as he gamely tries to keep the show running– through dropped lines, missed entrances and absurdly malfunctioning stage machinery.  The final chaos of the ill begotten dress rehearsal had the Friday night crowd roaring.

Not much has been done with the time setting of the play, placed in the early nineties, but it is amusing to see the use of a ridiculously large lap top computer being schlepped around the stage.  And it is a real treat to hear Nirvana blasting through the sound system.  All in all, the Rep provides a pleasant enough evening at the theater here, but they would do well to tighten up some of the early meanderings for a crisper production. 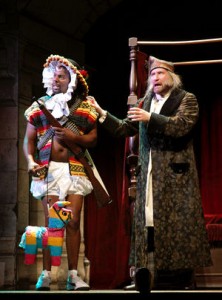 Reginald Andre Jackson as Walter Parsons and Ian Bell as Larry Vauxhall in a dress rehearsal for The Christmas Carol play within a play.