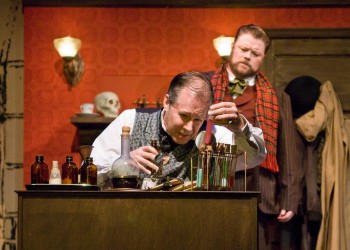 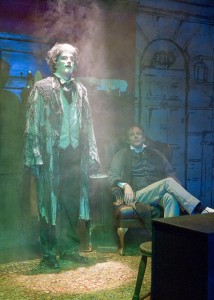 The work explores what happened to Holmes during the three year hiatus he was given by Sir Arthur Conan Doyle between his apparent death resulting from a struggle with Professor Moriarty featured in the short story “The Final Problem” and his reemergence three years later in “The Adventure of the Empty House.”  It seems the brilliant sleuth has had a tough time of it, dedicating his life to experimentations with chemicals both scientific and recreational and stubbornly avoiding all human contact.  Even dear Doctor Watson, recently widowed, has been shown the door to 221B Baker Street.  Sherlock is desperately in need of a spiritual transformation and Longenbaugh is up to the challenge.

Terry Edward Moore wonderfully handles the role of Sherlock Holmes and hits all the right notes.  Even in his darkest hours, the man can out deduce the sharpest London bobby.  Stephen Grenley is aptly cast as Doctor Watson; ever ready to provide the love and care Holmes is so desperately in want of.  The two establish a tangible bond from their very first scene.

Some of the double casting stretches credibility; Pam Nolte, Holmes’ motherly landlady, must too quickly transform into the Ghost of Christmas Past, making for some awkward moments in spiritual time travel. But generally the acting troupe handles this well crafted, thought provoking play with gleeful skill.  Aaron Lamb is particularly moving as the ghost of Professor Moriarty.

Longenbaugh’s Holmes is a far tougher challenge than Ebenezer Scrooge—for Sherlock can out think and mostly out maneuver any of his spiritual advisors.  The plot line explores the emerging role of science in the late 19th century as well as the natures of good and evil living side by side in World War One.

Longenbaugh is also able to imbed a couple of crafty mysteries within the storyline.   And keep your eyes open for a special cameo by a character from the original Christmas Carol.  Finally this somewhat quirky concept delivers a heartwarming tale—a pleasing way to pass a dark and rainy Seattle December evening.