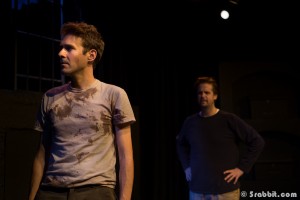 To Suicide or not to Suicide, that is the Question

River Ice, an original script written by Scott Timmons, takes place in a church crypt in Prague after the assassination of Nazi Reinhard Heydrich, governor of Bohemia and Moravia ( Czechoslovakia), during World War.  The two assassins Jan and Honza, are deciding whether escape is possible or whether they should commit suicide before the Nazi’s storm the crypt.

While Honza ( Erik Gratton) is trying to dig through the wall of the crypt to the sewers in order to escape,  Jan, (André Nelson),  is deeply invested in convincing Honza that suicide is the only solution.

There was only about enough material for a ten minute play, yet the playwright, Scott Timmons drew it out for 2 hours by recycling all the conversations over and over again, which could have just as easily been a radio play.  Visually it was extremely unappealing, the blocking was odd, most of the time Jan had his back to the audience and was speaking upstage.  In general, this play was about an interesting topic but did not rise to the occasion, and needs to go back to the drawing board.  Or typewriter.