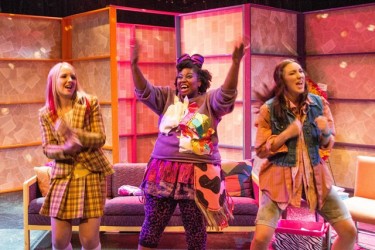 The script of STAGEright’s current offering, Calling Nancy Drew, is at heart a musical homage to that famous heroine, the “Titian-haired teenage sleuth” that so many of us know and love.  It’s also a satrirical deconstruction of the characters and plot lines that run through the fifty-plus books—just how does father Carson Drew make his money?  What happened to Nancy’s mother?  And really, aren’t George and Ned, the tomboy best friend and too-wholesome-to-be-true jock boyfriend, stuck so deep in the closet that they’ve forgotten what sunlight looks like?

Despite wonderful efforts from most of the cast, the production falls short, and it seems that the script is primarily to blame.  The show overall is long on charm, energy, and quirky 90s references—my favorite was the one about George Michael’s latest “cassingle”—but the play is very, very short on plot.  You could argue that the story doesn’t even start until the top of Act II, and that’s 1 hour and 40 minutes into the show.

The whole evening moves very slowly.  Jokes about being fat and/or homosexual can only get you so far, and the oft-repeated excrement gag just got tedious.  Still, Nancy (Mary Hould) and her friends George (Rachel Brun), Bess (Shermona Mitchell) and Ned (Jacob Mucha) are all delightful to watch as they do the best with what they are given.  Brun and Mitchell are particularly excellent at comedic timing, and each of these actors develops a nice rapport with the audience.  Patricia Haines-Ainsworth also turns in an energetic and polished performance as the devious, one-gloved villain, Neleh (insert OJ Simpson references here, here and here).  Catherine Crockett’s costumes are great, and Brandon Estrella’s set design of bright pastels and book pages as wallpaper also deserves a “shout out,” as Nancy and her friends may have said in the 90s.